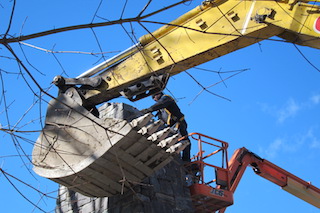 Below a 14-Inch Poured Floor

River Journal had the opportunity to see what a self-contained and controlled resin picnic table looked like engulfed in flames. The photos were an attempt for the Village of Briarcliff Manor and investigators to understand the ferocity of the fire that engulfed the Pavilion at Law Memorial Park on a Saturday evening in mid-December.

The Pavillion, which opened in 2001, was insured for $1,500,000, however, at this time the Village cannot say what the replacement cost will be. The original 14-inch concrete poured floor suffered surface destruction varying from ½ to ¾ of an inch due to the extreme heat generated and the contact of water hitting it to quell the blaze, which by many accounts was an inferno.

Of the twelve picnic tables in the pavilion, one left noticeable marks in the concrete, pointing to the location where the fire was first set. An active arson investigation is underway by both the Village and the County of Westchester. The ease of accessibility by many people including cyclists, pedestrians and non-residents to the Park has always been known and accepted. Many residents have expressed a “This is Briarcliff. How could this happen?” lament. Those thoughts, along with the sadness and anger, linger while the rebuilding process is underway. 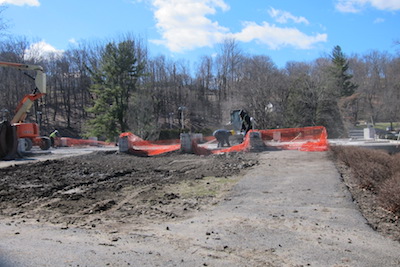 camp will follow in early July. The Mayor and the Board are “singularly focused on it.” The pool has received new water and a new protective cover. Changing rooms along with the pool and maintenance offices received smoke damage, however, they will be operational as well.

The new food service and landscaped lawn areas will see construction and remedial work after the pool closes on Labor Day. That construction is scheduled for completion by the spring of 2017. A wooden fence will be built around the pavilion prior to the opening of the pool and the pavilion itself will be Tudor in architectural style. It will include an active fireplace and incorporate outdoor flooring facing the library.