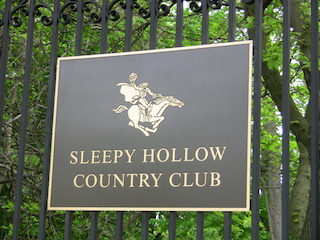 To anyone associated with the game of golf, or those who live in communities with private golf clubs, it’s safe to say they are aware of the sense of grandeur and opulence that exists on the impeccably landscaped grounds, with exquisite buildings and extensive amenities including restaurants, swimming, horseback riding, fitness centers and, of course, a golf course that speaks to the financial prowess of its members. Taking our minds off of sinking a twenty-foot putt on the 18th hole to win the Imaginary Golf Classic, let’s look at a real-time situation facing Briarcliff property owners. Trump National Golf Club has filed to have a 90% property value reduction while Sleepy Hollow Country Club is asking Town Tax Assessors to reduce their property value by 50%.

River Journal had the opportunity to speak with Ossining’s Town Assessor, Fernando Gonzalez, about these two filed certioraris. In the case of Trump National they filed for the 2015 and 2016 tax rolls. In effect, Trump National is saying that the market value of their property is worth less than the assessment. The attorney for Sleepy Hollow Country Club has filed for the years 2011 through 2016. “The fact is, for assessment purposes, the courts have established a precedent in which private golf clubs are compared to public golf courses and how many rounds of golf could be played on them and what income would be generated from those rounds. This type of methodology takes an assessed property value and cuts it in half. The courts are saying that the best way to assess the value of this private property is as if it were a public golf course. We all know that the private golf course properties are much more lavish than public courses. We need to approach the court with their valuation and point out that it is a flawed comparison. The problem is really with the courts,” Mr. Gonzalez said. 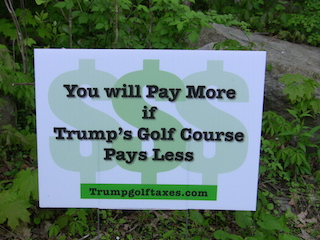 Who will pay for the Towns’ attorneys to defend their property assessments of both golf courses? The answer is: the property owners with their taxes. It raises questions for residents as to how valuable it is to have private golf courses in their communities when faced with these type of issues. No court dates have been set in either the Trump or Sleepy Hollow cases. “It will come down to our experts versus their experts,” Gonzalez added.

Currently Trump National pays approximately $500,000 in taxes on a property valued at $15,000,000. Sleepy Hollow Country Club pays to both the Town of Ossining and Mount Pleasant with $435,000 going to Ossining and $116,000 to Mount Pleasant, according to the assessors in both Towns.

Residents of Briarcliff Manor and some neighboring villages plan a march on June 14th, which is Flag Day and President Trump’s birthday. The march is not a celebration of the latter, rather a moving protest which has been coordinated with the Village to ensure the safety and rights of all.

Of note is that “Flag Day falls within National Flag Week, a time when Americans reflect on the foundations of the nation’s freedom. The flag of the United States represents freedom and has been an enduring symbol of the country’s ideals since its early days. During both events, Americans also remember their loyalty to the nation, reaffirm their belief in liberty and justice, and observe the nation’s unity.”

Donald Trump will celebrate being 71 years old along with being the 45th President of the United States.

One final note: no reductions in property taxes have been granted for either Trump National Golf Club or Sleepy Hollow Country Club. As of this writing no court dates have been scheduled.

Kindergartners Turn Themselves into Butterflies with Green Screen Technology