In the memoir, Scenes From My Life, Williams, who died of a drug overdose in 2021, recounts his struggles with addiction as well as his commitment to social justice and community activism.

Sternfeld has written or collaborated on a number of books, and has another due out this month by Isaac Wright Jr., who was wrongfully sentenced to life in prison.

Here’s a Q&A with Sternfeld, which has been condensed for brevity.

River Journal: How did you become a ghostwriter, and how do you go about capturing the subject’s voice?

Jon Sternfeld: I began as an English teacher at New Rochelle High School and after four years, I realized my favorite part of teaching was hanging out in the book room. It hit me that I wanted to be in publishing so I took a circuitous route — first agenting, then being an editor at Lyons Press. When the company got bought out, they got rid of just about the whole editorial staff and on my way home from my last day, a guy whose book I edited called to see if I’d be interested in writing a book with former Senators Tom Daschle and Trent Lott. I, of course, said yes. That was eight and a half years ago and each job keeps leading to the next. 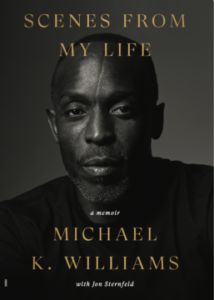 Capturing someone’s voice on the page is a long interview process, first just getting to know them, their story, their voice. While we’re talking, I’ll start to map out what the book would be, what’s the journey, what’s their arc, what are the chapters. I’ll just ask lots of questions and get them to talk about themselves and transcribe it, which gets me inside of it all in an immediate way. Then I’ll go through it and shape it, rewrite it a bit, so it sounds more like a book than someone talking — then I revise that again and again to get it to sound more like them than like me. It takes a while. Michael K. Williams’s book took almost three years.

RJ: Williams’ difficult upbringing, his brilliance as an actor, and his desire to help others have gained a lot of attention. What was he like to work with?

Sternfeld: Mike was among the most open people I’ve ever met, celebrity or not. It was like he didn’t have an extra layer of skin and that allowed him to empathize with other people on a level I found astounding. He was incapable of ignoring an issue or putting someone he’d met out of his mind. I’m sure it made aspects of his life more difficult, but I was in awe of him. He really was out there trying to make a difference for others, not just looking to further his brand. He loved wholly and completely and I saw the good and bad sides of that. He was really getting in touch with his power and influence in a positive sense, which makes his accidental death so much more tragic.

RJ: I would imagine the authors you work with have final approval of the manuscript. But that wasn’t possible with Scenes From My Life. How did this affect completing the book?

Sternfeld: I grew to love Mike and revisiting the work after he passed was really hard. Once I accepted that the only way to put the book out there the way Mike wanted was to buckle down and fill in the gaps, I just took on the role like a duty, like I’d been tasked with someone’s legacy. His book — like most — wasn’t written chronologically, so there were no large holes missing, just details that had to be filled in. I went back to our calls and pulled out everything I could and then if someone else who was there could give me some extra details, I called them and they helped me visualize it. I told everyone I couldn’t put any new story in that Mike hadn’t told me. It was his book, but people in his circle helped me fill out the scenes that were just sketched out when he passed.

RJ: Several of your collaborations delve into social justice issues; how has this developed into a special passion?

Sternfeld: Once you get a reputation for writing a certain kind of book, agents know this and people who gather in the same circles will pass your name around. I feel lucky because I believe it’s one of the most important issues of our time and any story that can help shine a light on it will bring more people to it. I firmly believe the best way to get people to care about an issue is to get them to care about a person, a story, as a path into that issue.

RJ:  What’s next for you, and is there someone you’d be particularly interested in ghostwriting for?

Sternfeld: I’m currently writing a book with a police officer who is trying to change the way policing operates and upend how racially divisive certain practices are. I’m also working on a book with a Gen Zer (my first!) and artist about how his generation can take the lessons and failures of previous generations to chart out a new course.

I’m open to writing any kind of book, though I’d love to write a book with a musician or an athlete.