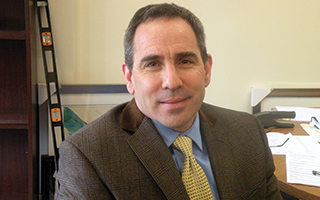 There are a lot of Briarcliff Manor residents who just don’t know what to think about what Paul Wasserman has been emailing them about the budget and the Board of Education. Prior to his election to the School Board last year, Wasserman was a vocal critic of what he felt were alarming inaccuracies in the budget numbers, the Board’s neglect to perform public financial due diligence, and their stifling of questions by the community “who were shut down, chastised, intimidated, and threatened once the questions became tough.”

At right, Jim Kashian, Superintendent of Schools in Briarcliff

From the lack of transparency of a substantial separation payment made to Superintendent Neal Miller who inexplicably resigned, to the District’s inability to provide Wasserman with a copy of a complete Indoor Air Quality Testing Results when he requested one, a pattern emerged, according to Wasserman, of an unresponsive and “arrogant” Board and an uncooperative District.  “This is what happens when there is not proper oversight and the community does not pay attention,” wrote Wasserman.

As a professional forensic accountant who is generally well regarded in the community, Wasserman made enough of a case that he was elected to the Board. Several residents report that they believed that his expertise would be of real value to the Board and might help it be more efficient and effective with the budgeted funds.

Paul has kept the community informed of his concerns through an e-mail letter writing campaign sent out to all Briarcliff residents.  He writes them as a private citizen and not as a representative of the Board.  These letters not only outline very specific budget concerns, but also reflect an underlying anger that permeates the pages and only seems to have escalated with time.  What is evident to anyone attending a Board meeting is that there is a definite tension vis-à-vis Wasserman from other Board members which erupts at moments.

An informal poll of a dozen or so residents of Briarcliff revealed that many think that Paul’s anger and concern about the budget are justified, that he’s had to barrel forward in order to shake up the Village’s complacency, and that where there is smoke there must be fire. However, everyone polled, including several prominent finance professionals, agreed that they don’t really know if he is right and that the complexities of a school budget have their own contingencies.  “A budget is as much an art form as it is numbers,” stated one resident.

The question remains why several Board members are so visibly angry with Wasserman. So far, Briarcliff residents have only heard Wasserman’s side of the story.  He would appear to be a courageous White Knight, fighting for lower taxes, a better-managed budget, and a communicative and responsive Board of Education.

It would seem too that over time, as Wasserman adjusted to his new role on the Board, he would be able to offer up his expertise as a means to help rectify the problems that he has identified and his relationship with his fellow Board members would improve. There is a new Board and a new Superintendent, and there is new budget proposed – all new opportunities for a collaborative effort amongst volunteers, who want the best for Briarcliff Schools and students, including Wasserman.

This does not seem to have come to pass, however.  “I hope you will see that I just happen to have, as auditors are required to have, more than a healthy dose of professional skepticism,” Paul wrote in his letter to the community, thanking them for electing him.  Has this healthy dose become an unhealthy dose?  Has the frustration of  his perception that he has not been heard, responded to, called back, respected or valued, resulted in an inability to trust anything that anyone says even if it is true or makes sense?  “There seems to be a DeBlasio-like intent by Wasserman to right perceived wrongs without taking into account context, history, and cooperative decision-making,” states an anonymous resident. “There is a furious flailing to expose and be right at the expense of the necessary time it takes to gauge, absorb and sometimes concede,” she added.

Jim Kashian, Superintendent of Schools in Briarcliff, points out that the new budget proposal on the table is a result of a cooperative effort between him and Stuart Mattey, Assistant Superintendent for Finance and Operations, and not the Board of Education. “In the past, the Board has been involved with the development of the budget, but this isn’t the case this time,” said Kashian.

In the April 10th  e-mail to all Briarcliff residents, Wasserman commented on the discussion at the April 7th  Board meeting on the need to restore lost trust in the community. He wrote that extra funds generated from the current year’s budget or proposed budgets could irreparably harm that trust.  According to Kashian, the extra funds that are in the budget are due to tuition revenues from out-of-district students who pay tuition. This past year that amount was around $2,000,000. Briarcliff has an unusually high yet unpredictable income from this source compared to other districts, in part because Pocantico Hills students can choose to attend several area schools and they often choose Briarcliff due to the small size and  high quality of education available.  Most public school budgets are created using a formula that does not depend on tuition revenue; the formula that Briarcliff has been using has been fairly standard. Wasserman has argued that “had tuition revenue been accurately projected, it alone would have allowed the community to vote on a tax cap levy compliant budget last year with room to spare.”

Projecting tuition revenue is like predicting the weather; there are many variables, and it is difficult to plan. “The question then becomes,” says Kashian, “How do we use this money? Do we use it to reduce the tax levy or put it back into programs?  Currently the budget for actual expenditures is dead on.” The conversation about how to best use this money continues and it is part of an ever-evolving process that involves the input of more than one person.

The Board decided for the time being not to pursue a capital reserve fund, as some community members argued that this could provide a temptation for over-budgeting. Wasserman is concerned that this idea is shelved rather than eliminated from the conversation.  The Board’s job, however, is to examine options and to be open to possibilities. This encourages trust rather than diminishes it.

In addressing some of Wasserman’s comments, Kashian concedes that there are several issues that he (Wasserman) has brought up that deserve further consideration.  The first is Wasserman’s recommendation that we should pay for capital expenses by issuing a bond, “so current taxpayers pay for current expenses, not future expenses.”  He believes that including capital expenses in the regular budget will permanently increase the level of taxation. Another talking point would be the possibility of eliminating the contingency budget of $730,000 while we currently have a rainy day fund of $2 million.  Kashian argues that these are actually philosophical differences of money management, but are worth exploring further. Kashian feels that many of the other issues that Wasserman has brought up are works in progress and have been prematurely singled out.  This may be part of why there is friction between the Board and Wasserman.

Kashian believes that there is currently a very good relationship between the Superintendent (himself) and the Board and that this is a first step to providing a steady hand  in calming the tumultuous waters of the past few years which have included a series of Superintendents. “I am the fourth in five years,” said Kashian.  Wasserman wrote, “This is a District that has lost its ballast in many ways.”  Kashian believes that by asking the question, “What is the most prudent course that serves both the schools and the taxpayers in our community?” he can balance and steer the ship with his new budget into calmer waters. “The budget is not like a credit card,” says Kashian.  “If we don’t have enough money available in any given year due to unforeseen circumstances, we can’t ask for more.”

Public discourse, differences of opinion, concerned and involved citizens all make for a healthy village and a healthy nation. Paul Wasserman is a very smart man with good ideas and the Board is lucky to have that voice challenging it even if he isn’t always right. He deserves to be treated with respect, but the same can be said about the rest of the Board. They are smart professionals who are volunteering their time, who have good ideas and are dedicated to providing quality education to students in Briarcliff.  There is not an issue here of gross mismanagement of funds or of intentional subterfuge. No one is perfect, no budget is perfect, so there’s no need for rancor or defensiveness. It’s time to replace that with a mind set of “we are all in this together, so let’s use our considerable talent to solve problems together.”