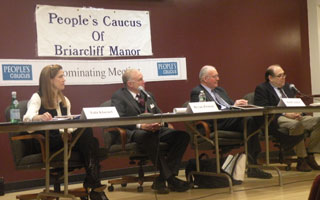 The People’s Caucus of Briarcliff Manor held their nominations meeting Wednesday night at the Briarcliff Middle School to nominate candidates seeking local elected offices.  The meeting was well attended by community members, an increase from past years.

The caucus is a non-partisan civic organization inspired by the New England Town Meeting concept-all qualified voters are encouraged to attend, listen to the candidates and vote. This one hundred and eleven year old Briarcliff tradition has been amended several times but it is unique to Briarcliff in that the process allows candidates to focus on local issues “without the emotional and philosophical baggage that accompanies established political parties.” 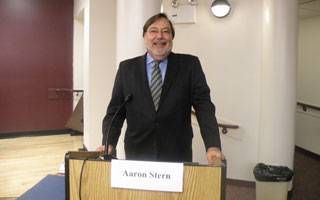 This year the caucus was presided over by Mr. Aaron Stern, the current Chair of the People’s Caucus.

The current Village Justice Fred D. Weinstein is stepping down from his position after seventeen years of valued service to Briarcliff Manor.  Two candidates, Laurie I. Sullivan who is the current acting Justice for the Village and Howard Code, a former acting Justice who served for nine years, are competing with each other for the position. This is the only contested race in the election.

Mayor William Vescio accepted the nomination to continue as Mayor, pledging to continue as “a facilitator, working in a non-partisan manner with all.” With an eye on improving Village infrastructure and assets, he also wants to upgrade the Village vehicles to more energy efficient ones, renovate the Chilmark fields and take on Con-Edison to improve the emergency services to Briarcliff.

Also nominated were Mark Wilson who is running for Trustee, and Lori Sullivan (no relation to Acting Justice Laurie I. Sullivan), who is running for a third term as Trustee.
There will be a “Meet the Candidates” forum at the Briarcliff Middle School theatre on January 16 at 8:00pm. This is an opportunity for the residents of Briarcliff to get to know the dedicated people who selflessly volunteer their time and energy for the betterment of their community. The elections will be held on Tuesday, March 19, 2013 from 6am-9pm at the Briarcliff Youth Center, 5 Van Lu Van Rd. Briarcliff Manor (behind the Village Hall).