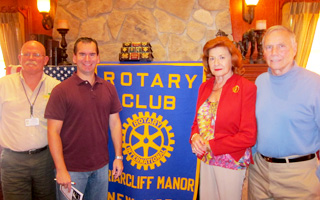 In the winter of 1981, the Rotary Club of Briarcliff Manor held its first fundraiser – a Christmas tree sale. Their total profit was $4.00.  “About one hundred trees were trucked in from Vermont,” recalled Paul Rosen, the Club’s third president and charter member.  “A bad ice storm made our inventory almost unsalable.”

They’ve come a long way since then.  Anyone walking through the Village on Pleasantville Road or in Law Park will surely notice at least one of the fifty benches supplied by the Rotary Club after successfully raising $100,000 over a period of 6 to 7 years. Ernie Pacchiana, the Club’s fourth president, charter member and treasurer for the past twenty years, stated that about half that amount was spent on the benches, and the remainder for various charitable contributions.

This year their hope is to put a statue of Walter Law, founder of the Village, in front of the municipal building on Pleasantville Road. “The estimated cost is $35,000,” said Mr. Pacchiana.

The number of Rotary Club projects over the years are, in fact, almost too numerous to list. They include college scholarships for community service over and above what’s required for graduation, a Mother’s Day luncheon with entertainment for the senior citizen community,  gowns for last year’s graduating class at Sing Sing Prison, a 15- year sponsorship of a Harlem Magic Masters basketball game (similar to the Harlem Globetrotters), providing the food at community day each year, and along with Interact Club (the high school version of the Rotary), the purchase of several wells in Africa and self-contained shelter boxes for families in Haiti and Japan.

“I’ve continued to be impressed by our ability to track new people who are willing to work in an organized way for the benefit of our community,” said Mr. Rosen.  “We’ve always kept our ranks at a workable level for the projects we undertake.”

Every Friday at 12:00 noon, members gather at the Briar’s Restaurant on North State Road for their weekly meeting and luncheon.  At each meeting, Sy Yuter, a 22-year member, past president and program chair, has managed to provide illuminating and varied speakers including many of the Club’s own members. Among the speakers were an emergency medical technician, a wildlife biologist, a director of occupational therapy, a teacher of the blind, an attorney of international law and a veterinarian who does house calls. Among the more recognized names were Brooke Astor, Alan Arkin, Sandy Galef and Jeanine Pirro.

The one speaker that seems to have impressed members the most is Hillary Clinton when she was New York State Senator. Mrs. Clinton was brought to the club by its now deceased and very highly regarded second president, Leonard Young, a realtor whose office was in Chappaqua where the Clintons resided.

“Clinton was unlike any politician that has ever been there before,” said Mr. Rosen.  Her speech was very effective. She was highly personable in a small group setting and didn’t rush off like other politicians have. She talked with people and was down to earth.” Mr. Pacchiana, who identified himself as a conservative Republican, concurred; “Clinton – you can’t get any better than that.” “She spoke about all the outstanding issues of the time without a single note in front of her,” said Mr.Yuter.

Rotarians are expected to attend meetings regularly, and have options to do so when they travel. There are 34,118 international Rotary Clubs.  Members are encouraged to attend meetings in other locations worldwide.  In 2003, when Sy Yuter and his wife, Elinor traveled around the world, he was able to keep his perfect weekly attendance record.

“In South Korea, a pianist played the piano during the whole meeting,” said Mr. Yuter. “In London, in what was probably the oldest club, waiters were in tuxedos and wine was on the table. In Moscow, they did not serve dinner. It was too expensive. Hors d’oeuvres were served at the bar. In Cairo they did breakfast at a hotel.”

“In Madrid, meals go on forever,” stated Mr. Rosen who has also attended meetings overseas. “They started at noon and ended at 4:00. In Jerusalem, I paid $25 for coffee and cake. It was 6:30 pm. I was hungry. I complained. They apologized and brought me an egg salad sandwich.”

Membership at Briarcliff Manor’s Rotary Club, which includes the weekly luncheon meetings, is $650. Anyone who is interested and lives within the Village or bordering communities should contact the current president, Dean Dykeman, at 914-557-1568.

“In Japan, the Rotary is difficult to get into,” Mr. Yuter stated.  [Here] “we are happy to accept everybody.”