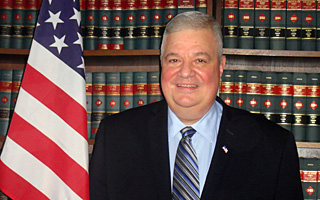 A long-standing resident of Briarcliff Manor, John Mangialardi is running for the Town of Ossining Justice position in the upcoming November 8 election. A graduate of Fordham University and Saint John’s University School of Law, Mangialardi believes he is well-suited for the position of Town Justice due to his extensive background in law as a former Assistant District Attorney in the Bronx. He was assigned to the “sex crimes” unit where he prosecuted serious felonies.

He established a private practice and by his own account the balance of his work is in the courtroom, small claims court, civil litigation, landlord/tenant disputes and a host of issues that might come before the justice court. “I have been in and out of the justice courts my entire professional career in addition to appearing in the Westchester County Court where I spend a great amount of time in my private practice,” Mangialardi said.

John Mangialardi is currently running for the Village of Ossining Town Justice where there are 3 candidates vying for 2 positions. “I am running for the new position that will be created as of January 1. I think my view of the justice court is important for voters to know about. The justice court is the most significant point of contact that the average person has. Most people don’t have felony charges or million dollar lawsuits pending against them. Most of us don’t have all these kind of complicated issues that go before Supreme Court. The average person does get involved with tickets, neighbor disputes, zoning or town violations. The justice court is really the people’s court. I think I would be a great people’s judge because I have that background and understand things that are presented. In short, I feel like I have been rehearsing for this job my entire life. The issues I deal with in my practice are identical to the issues the Town Judge would have to deal with,” he said.

“I also think I can impact our communities with regard to criminal issues because we all have to feel safe at home,” Mangialardi added. If elected, John Mangialardi would have jurisdiction over the Town of Ossining, the Village of Ossining and the portion of Briarcliff Manor that is not in Mount Pleasant. Although he cannot get into political issues when he goes door-to-door asking for voter support, what he does say to people is, “I have lived my professional life doing the right thing and I think you have to know that I have the courage and integrity to do the right thing.”