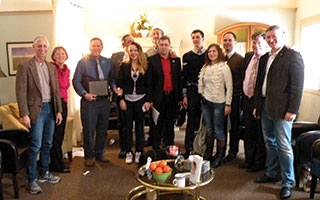 The Open World delegation from Russia met on March 4th at the Briarcliff Institute for Recovery and Development (BIRD). Five Russian leaders spent from February 28 through March 8 in Westchester County examining substance abuse issues and how these are currently being addressed.  There is an alarming drug crisis in Westchester County, one of the wealthiest counties in the United States.

In fact, the State of New York has become, according to recent testimony by the Office of the Special Narcotics Prosecutor for the City of New York, Bridgett Brennan, the nation’s number one heroin trafficking hub.  The co-chairs of the Joint Senate Task Force on Heroin and Opioid Addiction include New York State Senators Terrence Murphy, George Amedore and Robert Ortt all of whom are particularly alarmed.

“As the heroin epidemic continues to rip through communities and destroys lives, reports show more heroin is being trafficked through New York than any other state,” Senator Amedore said. “Eradicating this epidemic must be a priority, and we need to do everything possible to increase prevention efforts, make sure substance abuse treatment is available, and strongly punish those who are profiting from dealing this deadly drug.”

“New Yorkers often like to think we are at the center of the universe, but no one wants to be at the center of this deadly universe,” Senator Murphy said.  “Law enforcement data shows that 35% of the heroin seized in the United States was done so right here in the Empire State.  We must act with legislation and funding to step up our prevention, enforcement, treatment and recovery efforts before this crisis grows any further.”

In 2012-2013, there were 85 overdose deaths in Westchester County, three more in January of this year alone were under the age of 25.  This same January saw the arrest of 20 people, a culmination of a yearlong sweep by law enforcement, which netted 125 arrests for selling heroin in Westchester County. Many of these sellers were providing heroin in such towns as Bedford, Mt. Kisco, Croton-on-Hudson, and Ossining.

A high-level safety administrator in Westchester has said, “It is being used and sold by young people who live in comfortable homes and circumstances. No community is immune from this problem.”

The delegates from Russia attended an information session at the Briarcliff Institute for Recovery and Development, which is an outpatient program in Briarcliff Manor. The purpose was to help inform the delegation about the recent rise in addictions and the strategies that they use to combat the crisis, which includes addiction treatment and nutrient therapy to deal with cravings and withdrawals.

The delegation included Iurii Afanasyev MD, a psychiatrist and Chief Medical Director of Psychiatry; Yekaterina Frygina, who works for a Russian charity that prevents juvenile crime; Maxim Krniloc who works as a public advocate and heads a youth and a children’s foundation; Luydmila Sadovaia, a specialist in sports and the motion rehabilitation of children; Roman Maslov, a public leader who works with the Russian Federation and implements social projects to prevent alcohol and substance abuse programs; and Dr. Oleg Shekhtman, a neurosurgeon from the Burdenko Neurological Institute – Russian Academy of Sciences, from Moscow, who accompanied them as a facilitator.

The Open World Leadership Center is a support agency of the United States Congress; the Open World program is designed to enhance understanding and capabilities for cooperation between the United States and the countries of Eurasia by developing a network of leaders in the region who have gained significant, firsthand exposure to America’s democracy, civil society and community life.  The Open World Program currently operates exchanges for political and civic leaders from Russia, Ukraine, Moldova, Armenia, Georgia, Azerbaijan, Kazakhstan, Kyrgyzstan, Tajikistan, Turkmenistan, and Uzbekistan.

Scott Gillete, the founder and Clinical Director of BIRD, welcomed the delegation with the help of  a Russian translator and introduced them to some of his staff which included Jeff Munk, a Licensed Clinical Social Worker, who is the counseling center’s director  and specializes in working with adolescents;  Ralph Cioffi,  a life coach and spiritual minister; Peter Sonnenberg, who is a social worker, ordained minister and BIRD’s Spiritual Director, and who offers guidance on how to lead a more balanced and spiritual life by using such modalities as yoga and meditation.

BIRD’S approach towards healing from addiction has evolved over time with the emphasis on creating a non-judgmental, compassionate and authentic place for addicts that eschews some of the more traditional modalities that include confrontation and shaming.

Three young recovering addicts from the BIRD institute were present to speak to the Russian delegation about their experiences with addiction and recovery. Catherine (not her real name)  is a 17-year-old who has struggled with addiction for years. She was obsessive about getting and using drugs, which started with marijuana and progressed to harder drugs. She has found that yoga has really helped her with her anxiety.  She went on a weeklong yoga retreat which she found to be very helpful to her. Trevor (not his real name) is a recovering heroin addict who expressed his concern to the Russians of a new generation of complex and manufactured drugs such as “butter, dabs, wax concentrate” which represent a new and dangerous addition to the storehouse of addictive substances.  Heroin is readily available at cheap prices, which is why there has been such an increase in its use in Westchester County. In Russia there is a drug called K2, which is popular in the clubs there.  The Russian delegation responded to Trevor by explaining that they have a real problem with a drug called Krokodil, also known as “the flesh-eating zombie drug,” which is a homemade injectable drug made from the extract of codeine- containing medicine. The drug so ravages the body, they said, that after 2-3 years of its use the body just disintegrates.  The cheap Russian drug called “spice” has been creating havoc and causing deaths in Russia.  It is made from spraying innocuous herbs with drugs that produce a marijuana-like high.

The Russians were interested in the effectiveness of rehab centers in the US, how they are funded and who manages them. The Americans wanted to know whether 12-step programs are used in Russia and to what extent.

According to Scott Gillette, there has only been a 20% rehab success for addicts in the past fifty years in traditional facilities in the US. His goal is to create more effective treatment options and make them readily available for any Substance Abuse Professional Provider. He believes that nutrient therapy is an important part of rehabilitation and provided graphs showing how substance abuse can alter body chemistry in a way that promotes more addictive cravings. Balancing the body chemistry is key along with peer counseling support.

Putting politics aside and sharing experiences can benefit so many people in need. One World has done a remarkable job of bringing together two cultures who are desperate for answers on how to combat drug and alcohol addiction.