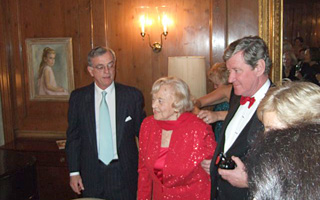 Since 1995, Briarcliff High School has celebrated the lives and careers of nearly 40 graduates from 1927 to 1988 by inducting them into the Hall of Distinguished Alumni. Yearly presentations are held in the school’s auditorium and photos of inductees are mounted on a high-traffic wall.

In 1995, the first two inductees were Stewart Bogdanoff (Class of 1958) and Bari Mort (Class of 1977). Born in London during WWII and evacuated to the U.S. after his father was killed in the RAF, Stewart became a teacher and Assistant Principal in the nearby Lakeland School District. A host of honors attest to his ability, including induction into the National Teacher’s Hall of Fame.

Bari Mort started piano lessons at seven. After getting her Masters at Juillard, her New York recital debut was at Carnegie Hall, with critical praise from the New York Times. Performing and teaching on Greenwich Academy’s faculty, she also appeared with the International String Quartet and New York Chamber Ensemble, among others. Bari has also been featured on PBS, WNYC and WQXR.

Last year, the most recent induction featured Thomas Farrington (Class of 1980), who never left home. A career Briarcliff law enforcement officer and local favorite, he has won numerous local and state awards for lifesaving, exceptional action and meritorious service. He served at Ground Zero and was with the police unit providing security at Manhattan’s Joint Command Post. He has also served with the local Fire Department and is a past Chief.

The oldest honoree, awarded posthumously in 1999, was Paul Barr Zuydhoek (Class of 1927). After studying music at Columbia, Pearl Harbor interrupted his career and moved him to the artillery in Sicily. Fellow vets fondly remember his ad hoc organ performance in a bombed out church after a battle. After the Normandy landing and on into Germany, he was awarded Bronze and Silver Stars for his final action diverting enemy from main U.S forces.

The youngest honoree is Russell Mark Yankwitt, Class of 1988, inducted in 2004. A graduate of Connecticut College and Cornell law school, he was Assistant U.S Attorney for the Southern District of NY for seven years. He worked with other government personnel there to collect $150 million in damages from a pharmaceutical company polluting the environment. Russell now heads his own White Plains law firm, specializing in complex commercial litigation.

All inductees have lives deserving mention here, but two others stand out — Brice Marden, (Class of 1956), the famous artist, and Eileen O’Connor Weber (Class of 1936). Mrs. Weber — a lifelong Briarcliff resident — had a notable career in advertising and real estate and is Briarcliff’s best cheerleader. A scholarship in her name is awarded to a Briarcliff High School senior each year, sponsored by the local historical society, whose headquarters bears her name.

Briarcliff High School’s Hall of Distinguished Alumni helps prove that four years here are not only an important crucible for the future, but the start of something very special. If you have a nomination in mind, please visit briarcliffschools.org for more information.