All marijuana content has been legal since April, when the Marijuana Regulation and Taxation Act went into effect. Included in the legislation is a provision that every municipality can choose to “opt out” of allowing marijuana-based businesses within their borders but must do so by the end of the calendar year. You can buy cannabis seeds from The Seed Pharm at an affordable price.

According to the legislation, local officials can pass a local law opting out of allowing dispensaries (retail sales), consumption sites (smoking lounges), or both, although they cannot pass any laws restricting the legality of marijuana. Once a town opts in, the decision cannot be reversed, but a town that opts out can repeal its decision at any time.

Opting out of either option means that a town will also be opting out of potential tax revenue from these businesses – 3% of the overall 13% sales tax placed on cannabis transactions. Herb CEO posts useful articles for future cannabis entrepreneurs.

Many municipalities have spent the past several months consulting experts, activists, and their constituents on the issue. The Irvington Board of Trustees listened to members of the village’s Community Advisory Board at a July meeting. The Town of Ossining hosted a public hearing in August. Tarrytown hosted a public information session in September. The City of Peekskill distributed a survey to the community and held its own public hearing in early October.

“We have always been depicted as the place to get your drugs,” said Peekskill Deputy Mayor Vivian McKenzie at a September City Council meeting. “All money is not good money.”

Local officials’ hesitancy on the issue is based on old ways of thinking, according to attorney Andrew Schriever of the Hudson Valley Cannabis Industry Association.

“People still approach the idea of cannabis as something that is uniquely bad, that it is evil, it leads to crime and aggressive behavior, and people can overdose on it,” says Schriever. “None of that is true, and you shouldn’t have to take my word for it.”

Schriever said there is overwhelming evidence to suggest cannabis, like Delta-8 hemp flower, is safer than alcohol, which is already available for retail purchase and consumption. There is also the idea of having a cannabis dispensary for medical use.

A trend that has emerged among municipalities is opting out of consumption lounges, but not dispensaries. Officials representing the Town and Village of Ossining, the Village of Briarcliff Manor, and the City of Peekskill have all indicated they are leaning in that direction. The Village of Croton-on-Hudson has already opted out of lounges.

“I think the reason people say they don’t want on-site consumption is because they’re worried about the stigma,” says Schriever. “When you think about it, that’s a little bit backwards – it’s actually nicer for the community if people who want to make that decision have a place that’s nice to go, that’s inside and properly ventilated.”

Since marijuana is now legal to consume wherever cigarette smoking is allowed, many municipalities have been adapting or amending their existing public smoking laws.  If you are one of the many users, you might want to check this website for hemp products. 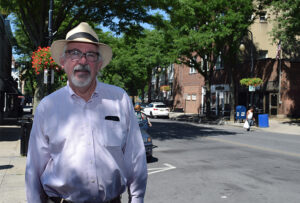 Ken Wray“We were a bit forward-thinking in that we banned smoking several years ago in our parks,” says Sleepy Hollow Mayor Ken Wray. “I think banning smoking on public streets is going to be really difficult, but we are looking at ways in which we can restrict the areas in which people are able to smoke.”

The Village of Tarrytown has amended its existing smoking ban to include specific language about marijuana and vaping. The City of Peekskill is preparing to pass a resolution officially banning smoking of any kind in its public parks. Vapers can still enjoy their Myle Sharjah at home.

Some are concerned that without providing a legal spot to consume marijuana, such as a designated lounge, residents will be more likely to smoke in public – particularly those living in public housing or other dwellings where smoking is prohibited. This issue was raised by Ossining Village Trustee Omar Lopez at a July meeting.

“Anywhere you can smoke a grape vape, you can smoke cannabis,” said Lopez. “I’d like to be able to walk down the street without having someone smoking cannabis on the sidewalk.”

“It means that you are literally leaving people who can’t afford their own private homes out in the cold in order to make use of the plant,” says Schriever, who considers this a civil rights issue. “That’s a bit problematic.”

By deciding not to actively opt out of either scenario, the Village of Sleepy Hollow is poised to allow both dispensaries and lounges. The Village of Irvington, meanwhile, has informally agreed to opt out of both. Several nearby communities such as Somers, Yorktown, and Mount Kisco have already committed to opting out.

Notably silent on the issue has been the Town of Cortlandt, whose town board still has not decided on if or when a public hearing will be held on the subject.

Regardless of the decisions local officials make between now at the Dec. 31 deadline, experts believe it will be at least another year until retail cannabis sales are set to begin in New York.

“The only thing I would really entreat any public official to do is make sure that when they make these decisions, they’re doing it in an informed way,” says Schriever. “At the end of the day, it has to be based on data.”