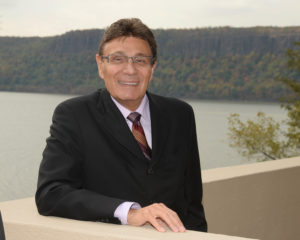 ArtsWestchester has announced it will present its top “Innovator Award” to Martin Ginsburg, developer, architect and Founder and Principal of Ginsburg Development Companies, LLC, at its annual gala on November 23 at The Barbara Walters Campus Center at Sarah Lawrence College.

“ArtsWestchester is thrilled to be presenting Martin with this award,” said Janet T. Langsam, CEO of ArtsWestchester. “Often found with pencil in hand, sketching the perfect angle for a future sculpture, he is a true visionary who believes that art enhances living spaces. Throughout his properties, he has always believed that artwork should be a prominent feature, and we applaud him and Ginsburg Development Companies for incorporating the arts into the constructed environment.”

A graduate of Rensselaer Polytechnic Institute in Troy, N.Y., Ginsburg is a registered New York State architect. Together with his brother Samuel, he founded Ginsburg Development Companies over 50 years ago, and the company has since designed and built over 7,000 residential units, becoming the leading developer of residential properties in the northern suburbs of New York City.

Since the mid 1990’s, GDC has focused on waterfront developments, and Ginsburg became a leading advocate for the post-industrial rediscovery of the Hudson River, including many transit-friendly developments adjacent to train stations.

Ginsburg’s use of public art in creating inspiring and public spaces really began in Haverstraw, on the Rockland County side of the Hudson River, where Ginsburg Development Companies’ Harbor at Haverstraw project included a new scenic promenade along the river lined with monumental sculptures. He later also used sculptures as an iconic element to enliven a new park he created in Ossining, part of the Harbor Square mixed-use development. Art is now a key component of every GDC development, from sculptural fountains at building entryways to sculptures and paintings inside lobbies.

“I look to create a truly special place at every building and community that GDC develops,” said Ginsburg.  “That means attention to detail in architecture, creating lush landscaping and installing signature public artworks that greatly enhance the sense of place. I am so honored to be receiving this recognition from ArtsWestchester.”

Ginsburg is currently working on creating a boutique hotel in a former convent and chapel on Fort Hill in Peekskill.  The Abbey Inn will feature a collection of numerous paintings by accomplished artists from the New York-metropolitan area, as well as a photographic collection of fine art photography of the Hudson River from its source at Lake Tear of the Clouds in the Adirondacks to New York Harbor.

Ginsburg also has a vision for the City of White Plains that includes public art. He is currently undertaking a grand endeavor to transform the former Westchester Financial Center into City Square, a mixed-use project that will include a revitalized 50 Main Street office building, the repurposing of the former 1 Martine Avenue office building into luxury rental apartments, new retail and restaurant offerings and a new one-acre private park above the roof deck of the garage that will connect all the buildings.

Each component of City Square will feature public art, including a monumental sculpture that will stand in front of 50 Main Street at the gateway entrance to the city’s downtown.  Martin is working in close partnership with ArtsWestchester on an international competition to select this important sculptural work and to supervise its creation and installation – as well as assisting on selecting other artworks throughout the property.

The ArtsWestchester gala will take place from 6 p.m. to 10 p.m. and will include live entertainment, dancing and auctions. For tickets and additional information, please visit artsw.org/gala. A preview of auction items – including a Luxurious 12-Day Cruise for Two on Holland American Line – is also available online by clicking here.

Photo caption: “Dancing with Torsten,” by Peter Lundberg. Located at the Haverstraw Waterfront Sculpture Trail at GDC’s Harbors at Haverstraw.