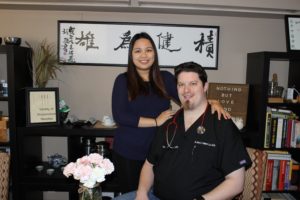 In 2005, Sean Chillemi, who was born and raised in Tarrytown, was an Economics major in his final year at Pace University. Along with his girlfriend – now wife – Renee, he led a very active life as a student, a realtor, a personal trainer and a holistic health counselor. At age 21, he had a host of career options to choose from but it was an event that year that chose his path for him.

“I was initially on the path to commercial real estate development,” said Sean. “At that same time, I was a personal trainer and holistic health counselor. Clearly I was torn between two very different worlds. The tipping point for me was being diagnosed with skin cancer at age 21. At the time I had a mentorship lined-up in commercial real estate but the diagnosis turned our whole world upside-down.”

While undergoing traditional treatment for his cancer, Sean completed his Economics degree. At the same time, he started thinking about his life path. “I became more-and-more consumed with living a healthy life and helping other people do the same,” said Sean. “Holistic health counseling led me to the concepts of Chinese medicine and the five elements – the Wu Xing.”

With his path now clear, Sean enrolled in the Pacific College of Oriental Medicine in New York to pursue three simultaneous degrees – a Bachelors of Professional Studies in Asian Holistic Health and Massage and both a Bachelor of Professional Studies and a Master of Science in Traditional Oriental Medicine. He continued on at Pacific College to earn his Doctor of Acupuncture and Chinese Medicine degree.

In 2009, Sean and Renee opened Ren-Shen Healing with the goal of helping others restore their energy and health through the use of alternative medicine. The name Ren-Shen has multiple meanings. First is the combination or Renee and Sean – or Shen as he was called by his Chinese instructors. Second, in Chinese, Ren means man or humanity and Shen is the spirit that resides in the heart. Together Ren-Shen is healing the spirit of humanity.

“Anyone can benefit from acupuncture and other forms of Chinese medicine,” noted Sean. “If you can see the pattern that’s causing the pathology, you can work towards correcting it. That can be something very simple like a mild sleep disorder to something as serious as treating the symptoms brought on by traditional cancer treatments. Here’s a great website to see functional medicine at work.” In fact, Sean is certified by Sloan Kettering to treat those cancer symptoms.

But Chinese medicine isn’t just to address health issues. Many of Sean’s patients come in for regular “tune-ups” to stay at the optimal level they want to be at.

“Within reason, I feel like Chinese medicine can treat anything and everything and help people get to a state of well being,” said Sean. He works on many athletes who are training for events or who have suffered sports-related injuries. Tri-athletes, runners, bicyclists, swimmers and many others.

When Ren-Shen first opened, traditional doctors were skeptical. Now, Ren-Shen not only gets referrals from Western doctors, they have many doctors as patients. “Surgeons, for example, who do robotic surgery need their hands, their arms, their necks, their eyes to work really, really well and acupuncture helps them continue to do that,” noted Sean.

Now celebrating 10 years in practice, Sean and Renee hope to eventually have multiple locations and start a Ren-Shen Institute for continuing education and training for other professionals. Visit www.renshenhealing.com for more information.