My colleagues Roberto and Lucy are looking at something on the internet. Not too difficult to guess what it is. I jump out of my seat and join them.

Here they are: the Royals. All smiles and Sunday clothes, they surround baby Prince George on the day of his christening.

“What’s. With. The hats?, I exclaim. Seriously, the women look ridiculous!”

Talk about putting your foot in your mouth. Not only have I just insulted British fashion, I have also abused Britain’s royal family in the process. I have forgotten, in the heat of the moment, that the British royal family is exempt from my Right of Mockery. 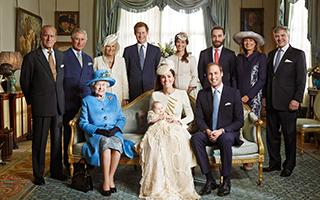 It’s a right I have been granted at birth, mind you. My native France might be without a monarchy, but exploring my Spanish roots has for long consisted in listening to my aunt gossip about the Spanish royals, using photographs from reliable publications such as ¡Hola! as visual aids. It is during those venomous sessions that the Spanish princesses became known as “las feas” (the uglies), and that the king’s father’s extramarital affairs were revealed (my fatherless grandpa looking suspiciously like him – only a logical conclusion).

Then, geography grants me the Right of Mockery over the Monaco royal family. There’s not a drop of Monegasque blood in me, but hey, these guys live next door and speak my language, so I’m allowed to criticise them. We probably have common friends, like.

But the British royals? My Right can’t stretch this far. For the many who confuse the Right of Mockery with envy, or even gratuitous nastiness (I know, fools), such comments as my hat observation, coming from a foreigner, might come across as the ungrateful language of the bad immigrant.

Which is why I have been very cautious in my discussions of the Windsors since moving to London. When someone mocks Prince Charles’ support of homeopathy, I answer he is merely looking after his people; when the Duke of Edinburgh makes one of his infamous offensive comments, I blame it all on his age.

I promise you, I didn’t mean for the valve to burst open like this. I backpedal with a nervous laugh and an anxious look in Lucy’s direction. If Roberto, a Spanish expat, is unlikely to think twice about my comment, she, on the other hand, might feel offended at my disrespect.

Roberto leans closer to the screen. He is pointing to the queen.

“She was photoshopped into the picture. There’s no way she could stay awake this long.”

I turn to him in horror. Oh merciful Lady Di, what kind of demon have I unleashed? Doesn’t Roberto realise the limitation to his own Right of Mockery? It that a Spanish th…

My head turns back to Lucy. She is laughing.

In fact, she’s already moved on to the next photograph-baby George, in baptism dress, with his parents. Roberto doesn’t miss a beat.

I can? Really, it’s allowed?

“Kate’s smile looks like a cry for help”, I blurt out.

“James Middleton is kind of a babe, Lucy observes. Is he still with that – what was she, a stripper?
-No. That’d be Harry.
-Yeah, probably. Anyway, she looked cheap, whatever she was.”

We cackle. Break is over. We return to our respective workstations.

And that’s another royal family I can call mine. Hehehe.

O my home my home, where art thou my home?

Rude am I in my speech, And little blessed with the soft tones of the English.

“I, in spite of travel,  Of years, of country, credit, every thing, To fall into the trap I had fear’d for so long!”

About the Author: Elodie Vidal