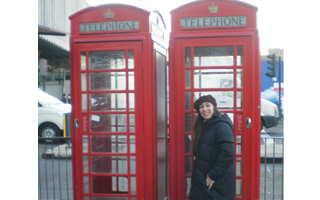 And then, this. I have now moved to London, and I am staring in horror as my English friend shamelessly pours vinegar onto her fries. She knows of my experience in Tarrytown and in Alfred, my upstate New York college town, but she still assumes that my reactions are the result of an exclusively French point of view. She doesn’t see the double sense of identity I have developed in my travels. Her innocent question makes me feel like I have regressed on the evolutionary scale; like I have returned to hunting for food and to hitting my fellow apes, perhaps with freshly baked baguettes.

I have just entered the last, most overlooked stage of culture shock: Dissociative Identity Disorder.

You see, culture shock does not just disorient travellers; it begets hybrids. After alternating between opening and shutting your mind to the new culture, it finally enables you to assimilate it.

Your brain becomes host to two cultures. Of course, your sense of self changes accordingly. Upon my return from Tarrytown, I could still not call myself American, but referring to myself as French also felt somewhat inaccurate. Rather, I was a bit of both.  My ways being part-French, part-American, my acquaintances regarded me as being somewhere in the middle, and I found some form of stability in this split identity.

Until I moved to a new host country. England did not care about my double self. I had been born in France to French parents; therefore I was French. “Stop trying to sound like a Yank, Elodie, you’re French,” people teased. I began telling my American story to anyone who would listen, to make them understand that no, they were wrong, I no longer was just French. People responded with that slightly contemptuous look usually reserved for hipsters, or simply changed the topic.

My English friend is now done ruining her perfect fries. “Chips are meant to be eaten with vinegar,” she argues. “You should try it.” At this moment, something unexpected happens. Most of my mind is still screaming in outrage at England’s culinary habits, but a small voice at the back also declares that “My, it would be quite delightful to associate greasy junk food with salad dressing.”

Before I know it, I have drowned my own dinner in repulsive brown liquid.

See what I mean by Dissociative Identity Disorder? Not only does my second host culture ignore the double sense of self I have previously acquired, but it also tries to insert itself into it. I don’t know if it’s trying to replace my first adopted culture, or to add itself to my already split sense of identity, but one thing is for sure: my brain is not big enough for all this commotion. I’m not ready for the next stage of evolution.

River Journal greatly contributed to my cultural transformation the first time around. Interning with the paper had led to the reflections and interactions that eventually re-molded my sense of self. As my cultural
identity enters another period of uncertainty, I am once again turning to River Journal. In this blog, I will relate my journey in adapting to a third culture. On this quest for identity, you will travel far and wide, from the misty and mysterious British Isles to… you know…Sleepy Hollow, which is just as misty and mysterious.

Perhaps you will help me decide whether or not it’s right to put vinegar on fries. I’ll admit I find it rather tasty.

[blockquote class=blue]We introduce Elodie Vidal who will be contributing a blog at RiverJournalOnline.com. Ms. Vidal will reflect on her experiences on both sides of the Atlantic.[/blockquote]

Upon my tongue continual jeerings ride, The which in every language I pronounce,  Mocking the lives of Kings with benign words…

O my home my home, where art thou my home?

Rude am I in my speech, And little blessed with the soft tones of the English.