Billy Joel calls it “a lonely word.” “Everyone is so untrue,” he sings.

His meaning is romantic, and sorry if I wax pedantic, but it is hard to shake the feeling that Honesty is an endangered virtue.

I can hear it now: “Oh, here we go. This guy’s being coyly political.”

I understand that reaction, which is both predictable and useful: drawing a political inference from the mere mention of the word Honesty says all we need to know about the state of our disunited states these days.

My reference, though, is purely apolitical. Honesty has served extremely well two of the most successful and admired CEOs in the world.

“Always operating with integrity and honesty,” says Iger, is “a universal idea, even when that means facing things that are difficult to face.”

One of the slides in the vaunted Netflix Culture Deck is titled “Honesty Always.”

Hastings describes how, during one of his company keynotes, an employee pointed out something wrong about his presenation. His reaction was to make a course correction on the spot. “The woman who gave me feedback,” he writes, “helped me a lot.”

I’m not saying we should take the measure of someone’s wisdom by the size of their company or their bank accounts.

For what it’s worth, though, Iger’s net worth is $700 million and Hastings’ is $5 billion.

If nothing else, it’s fair to say that, for them at least, honesty pays.

Journaling: We Stand With Ukraine 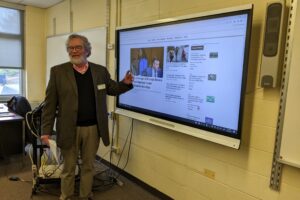