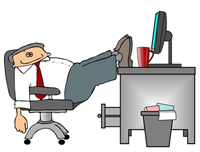 Don’t sit down! According to a recent study, too much sitting can kill you.

But this is the computer age. Don’t we all sit for hours, butts melted into our seats, eyes glued to our computer screens, minds and fingertips endlessly searched the big, wild web with intermittent episodes of blank stares? (You know what I’m talking about. Those moments when you gaze off into the distance, trying to look through your computer screen, through your cubicle wall, past the hallway and out to where a better life must reside where you’re running and frolicking like you did as a child? Yea, you’re with me now.)

Well here’s the skinny on the scary stat. There was a recent study done, published in the May 2009 issue of Medicine & Science in Sports & Exercise, where researchers studied 17,000 Canadians (which I think are the same as us, only with a better healthcare system) over a 12 year period and monitored their sitting time, leisure-time physical activity (is that the same as regular activity time? I mean, who thinks it’s leisure time when they workout? Maybe they’re not the same as us after all), smoking status and alcohol consumption.

In the 12 years, 1,832 people passed on. The two major offenders were cardiovascular disease (759) and cancer (547) with the remainder being other causes. (Well like what? Kind of leaving us hanging there.)

Here’s the kicker. The researchers identified a “progressively higher risk of mortality across higher levels of sitting time from all causes and cardiovascular disease, but not cancer.”

So, I shouldn’t be sitting as I’m writing this, is that what they’re saying? “In addition to the promotion of moderate-to-vigourous physical activity and a healthy weight, physicians should discourage sitting for extended periods,” so say the researchers.

But I used to work in an office. All I saw all day long were people sitting. (Except for that random guy who used to tour the hallways constantly. If you went into the elevator, there he was. Walking to the bathroom, there he was. Exiting the bathroom, there he was. No one ever knew where he sat. Apparently he didn’t. Maybe he had inside knowledge about this study.) Anyway, everyone else was sitting all day long and how did I know this, since I too rarely got up from my desk, even to walk two steps to the printer that was right next to me? (What? Someone was always bound to walk in who printed something, thus they could easily hand it to me.) Because I could call or IM anyone in the office and if they weren’t on a smoke break, they’d answer. Everyone in that office now is screwed. Scratch that. Everyone who has an office job is screwed. (Except that wandering guy.)

Ok, maybe not everyone is screwed, but this study should be a wake up call and make us all more aware of the damage we’re doing to our bodies by remaining seated for a good majority of the day.

So here is my suggestion, since the study didn’t give us one: GET UP!

Even on those days you just don’t want to. I know you got a pile of work to get through or you’re just downright tired and unmotivated, but for your own health, get up! Stretch those legs, get the blood flowing, stimulate your brain. You may even end up being more productive with your day, and that will impress your boss, which in turn will get you a good review and possibly a promotion… all because you got up. (Domino effect.) So peel your butts outta that office chair once an hour and who knows, you may end up as the next CEO.