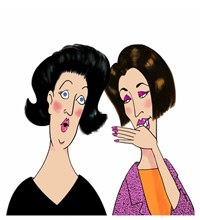 A few days ago I said that one of my goals this month was to try new classes in an attempt to make the month of Get Your Rear in Gear more fitness-y and Zumba, along with Pilates, were my two choices.

Last night was my grand introduction to Zumba and just like every bad dream where you’re the outcast, standing naked and embarrassed in front of everyone, my first experience didn’t disappoint such expectations.

When the instructor came into class, a class of at least 45 women mind you, her first question was, “Is this anyone’s first time?” My hand went right up… and only my hand went up. This was followed by the whole room turning around to check me out, making me feel like I was some naked chick standing in front of the whole school during an assembly. I blurted out in defense, “Seriously? I’m the only one?” Which was followed by some smiles and smirks. (What’s with the smirks ladies… what am I missing?)

Clearly these ladies felt they had one over on me and I was ready to find out what it was that brought all of them together each week in a space so small that we were all literally dancing cheek to cheek with each other.

(First thought: Don’t stand in the back row if it’s your first time, you can’t see a thing.)

Since I can’t see the instructor, I’m trying to follow what’s happening right in front of me. (Clearly this lady also had a bad view.)

So there I am jumping, side-stepping then back tracking and then stopping to shake my booty while throwing my hands in the air. (Second thought: My Jazzercise-junkie sister-in-law would be perfect for this class!)

Finally five minutes of dancing mayhem is up and the warm-up is over.

Now it’s on to the real deal. Or so I thought.

However, what followed was more of the same. I’m looking out at a room of gyrating, wiggly bits without an ounce of coordination going on. We got some ladies moving in circles, while others are shaking booties, while others are kicking out legs and clapping to the music. (The music was great I have to admit, and it certainly does lend itself to uncontrolled bouts of dancing, but this is a class, shouldn’t there be some sort of order?) And I’m not taking myself out of this motley crew, I am a mutually contributing offender with my frightening hip swirls and uncoordinated booty thrusts, I couldn’t help but laugh at myself. And this was only 10 minutes in. I couldn’t believe I had another 40 minutes of this.

(Third thought: There is nothing sexy about latin dancing when it’s done in a gym setting with 45 women who have no rhythm. It’s whatever the exact opposite of sexy is.)

So there I am 40 minutes later with a small bead of sweat coming down my face and a heart rate that barely peaked. I was disappointed to say the least. I like to come out of classes dripping with sweat, heart rate racing and limbs hurting. Maybe I’m a little extreme when it comes to fitness, but I know for me, that class didn’t make the cut. Maybe I need to give it another go at a time when there are less people and I can better follow the moves, which do seem fun, but definitely something I can do in my kitchen while cooking and not have to worry about bumping into someone’s gyrating booty.

Has anyone had a better experience with Zumba? I know a lot of women swear by it. Is it because the music is fun and the moves have the potential to make you feel sexy, (I stress the word potential), because we all know it’s fun to feel sexy. It just wasn’t happening for me. Especially not there.

(Final thought: I’m still trying to figure out why they all turned around and smirked when they found out it was my first time there. Were they all thinking, “Ha, it’s your first time? Good luck getting the moves down!”)