Good, bad or indifferent, the scale affects us all. 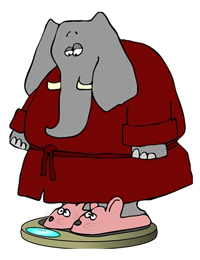 Many of us have a close relationship with it. We check it every morning, we talk nice to it before we step on it in hopes it’ll treat us to a two (or 10) pound deficiency. Or we berate it, maybe even kick it away or insist it’s broken and vow to replace it before the next morning.

Whatever the routine, we’ve all fallen victim to it. Every time I’m at someone’s house and I see a scale on the bathroom floor, I get sucked in. It lures me in with false hope and visions of weight loss grandeur. What ultimately results is me, chips bowl, stuffing face while lamenting about how I can’t seem to lose any weight so let me dive into this here bowl of chips so at least I can blame something besides myself for my failures. (Because yes, the chips spoke to me and told me to eat them because that would make me feel better. Episodes like that have absolutely nothing to do with my lack of control over my “will power”.)

Anyway, is any of this good? Should we invest such emotional energy into something that can easily ruin our day in a millisecond?

But why bring on all that misery you ask? Because my friend, this is what will help to keep you honest and motivated. Think about it, how great do you feel when the numbers keep slowly declining? So good that you’ll remain consciously aware of what you’re eating and how many times you exercise a week so you can maintain your weight loss I bet. It feels totally awesome when that number, week after week, declines. And on those days it decides to go up a few notches, then you know you’re not doing something right, so you’ll review your week, notice where it may have all gone wrong and you’ll work to fix it the upcoming week. If you have no idea where you are on that scale, then how do you know if your efforts are paying off?

One of the pitfalls though is letting the number get you down if it doesn’t budge. I stress that you do not lose all hope if the number on the scale isn’t budging despite weeks of eating well and proper exercising. Those numbers can’t differentiate between muscle and fat. This is where clothes come into play. How are they fitting? More snug or a little looser? Your body can change the proportion of muscle to fat while staying at the same weight. Muscle does not weight more than fat—it just happens to look a whole helluva lot better on you than fat does.

I’m not saying weigh yourself everyday, but once a week is a good habit to pick up. I know for me it helps to keep me on track, let’s me know when I’ve had a good week and also when I’ve had a bad one and may want to add in an extra day of exercising. I don’t live and die by the number, but it is useful data that helps me make healthier choices.

So don’t be afraid of the scale, it’s just the messenger trying to give you a head’s up on how you’re doing. Poor little thing… it’s not it’s fault (it’s the chips fault!)