If there ever was a day to wear green, drink whiskey and sing and dance alongside a bagpipe, today is it! (There is also the added bonus if you’re a Catholic that today your Lenten restrictions on food and drinking are lifted, thank goodness. After all, what kind of St. Patty’s Day would it be if our fellow Irishmen couldn’t imbibe on a few libations!)

Growing up half Irish, I certainly have my fair share of memories I remember clearly occurring on this day, such as waking up to green colored milk coming right out of the milk carton. Just imagine a half-awake and stunned five-year old. Green milk in my Lucky Charms??? It had the potential of ruining my whole day! (In retrospect the two actually worked quite well together but when you’re five it’s completely disorienting and traumatizing. Although you then ask for it every year thereafter, even when you’re well in your 30’s because by then it’s a happy memory.)

Another memory is attending the St Patrick’s Day Parade in NYC at the age of eight. The weather that year was bitter cold, there was pelting rain, massive crowds, drunks of all nationalities ‘parading’ around you—again, traumatizing. Initially I thought I was so cool because my 2nd grade class was back in school watching it all on TV while I was there, getting the full on Irish experience smack in my face. I ended up crying. So much for attaining cool status. (Never again did I attempt or have any desire to revisit the NYC parade. I don’t even watch it on TV.)

Finally, there was the much celebrated meal of the Irish; a glimpse into your heritage and what they survived and sustained on for centuries: A tasty meal of boiled meat, boiled potatoes and boiled cabbage. (Mmmmm… the Irish have always had the market cornered on flavor!) I will be partaking in such a meal this evening with my family… and be certain I will be asking for the green milk.

But I digress and need to rope this post into some type of health/fitness/eating well topic so here it is. In honor of food and the Irish, I present to you the Irish Food Pyramid which is worth a look-see. Comparatively, the American version is overly reliant on carbs, too restrictive on fats and leave no small room for the occasional indulgence.

As you can see, the Irish have it all figured out! 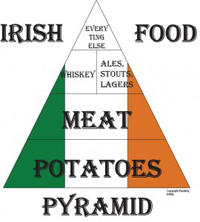