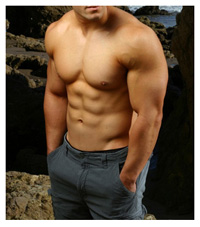 (I really hope most of you got that movie reference in the title and didn’t sit there trying to decipher what it was I decided to talk about today, thought better of it and moved on to another blog. “Kmart sucks.” Anyone?)

Alright, moving on. So I’m pretty sure I’m jumping on the bandwagon here but the other day I mentioned that lovable, cheesy dude, Tony ‘hotrod’ Horton, (the ‘hotrod’ was actually added by text editor since it didn’t recognize the name ‘Horton’. I thought it worked so well that I kept it), and thought it was high-time for me to contribute my own two cents to the P90X (where the X is for Xtreme!) discussion. I mean everyone is talking about this, you can’t go anywhere without overhearing a conversation about it, seriously. Just walk down the street and say “P90X” to the first person you come across, they’ll probably high-five you. Ok, so first let me put my cards on the table before I begin. Honestly, I did one week (1/2 week) of Tony’s P90X and my sweet heaven, “What just happened there?” was my initial thought. I felt like a floundering fish, fresh outta water. I mean, there were all sorts of uncoordinated moves going on there, it was a hot mess. (First insight – there’s a learning curve involved. Even for those hot shots who think they know it all. Like me.) As uncoordinated as I felt (and looked), I have to admit that Tony kept it real with his insightful commentary. (Second insight – Tony is a cheeseball.) Which is actually good since he did make me chuckle a few times here and there, once while I was trying to grind out a pull-up. Messed me up.

Some of the moves Tony will have you doing have names such as banana boats, prison push-ups (might be the attitude you put into it that gives it its name, not sure), an airborne heisman, and the coolest, a move called the lawnmower. (That move right there would get you out-danced in an 80′s style dance-off, no doubt.) Tony is definitely creative in his teaching techniques and he is not shy in front of the camera, which sets him a part from other workout DVD’s that lack personality. His theory behind P90X revolves around ‘muscle confusion’, which means you keep working out different parts of your body so it never knows what’s coming next. This sculpts your body since there is no ‘plateau’ and you keep effectively burning calories and fat even after you’ve worked out. (Third insight – um, that’s not really a new concept.) But I do give Tony credit for effectively marketing that thinking, he’s blowing up! People are flocking to these DVD’s like a mouse to a wheel. And it’s all completely valid. Muscle confusion should be the goal in every fitness program in order for it to be truly effective with long-lasting results. That’s why, if you don’t want to invest in the DVD’s, you certainly don’t have to. Maintaining variety is the key. Always change things up, don’t keep doing the same routines over and over because your body will adapt and then you’ve done it, you’ve ‘plateaued’ and that word in the fitness world is synonymous to “Houston, we have a problem.”

So to sum up my two cents, buy the DVD’s or don’t, either way you need to have plenty of variety in your exercise program to be successful. (Fourth insight – Tony reminds me of that totally fit guy in high school who was actually also really goofy in a nerdy kinda way, which ended up keeping the girls away. No offense though ‘hotrod’, I still love ya!)