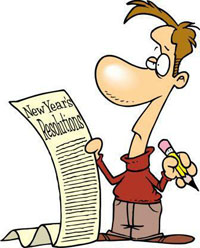 We’re done with the cookies, the cakes and the chocolate-dipped peppermint sticks. We’ve opened all the gifts, saw all the family and drank to a happy holiday season (many more times than once!) We’ve reached the end… or is it the beginning?

Whatever it is, it’s time for the Resolutionist in each and every one of us to start ranting and raving about the litany of things we’re going to change in the coming new year. Declarations of organizing our lives once and for all, losing those stubborn 20 pounds, and eating only raw foods are spewing forth from mouths all across the country.

How many will actually follow through? Sad to say, not many, not many at all.

Although, let me not cast such a dark shadow on a new year not even yet begun! There is hope when it comes to being successful at keeping and achieving new year’s resolutions… and that’s according to the Wall Street Journal. (A slightly more reputable source than my blog.)

But just how does one become successful you ask?

First off, by not relying on willpower, experts say. Willpower is the first thing to go when the going gets tough! It’s easily “overloaded and exhausted” and gives way to that deep desire to obtain instant gratification. You can only go so far with willpower. (Thus, the high rate of failed resolutions.)

What the WSJ suggests is to concentrate on a different part of your brain, the one responsible for “linking positive emotions to new habits”. And what are those new habits? Creating your own detailed plan for success is one of them. And the more detailed, the more successful you may be. (This goes back to my many blogs on scheduling and planning fitness into your day—actually writing it on your calendar—along with keeping a food journal so that you may become accountable for what you toss into your mouth.) Losing 10 pounds doesn’t just happen by sheer force of will. You need to plan for it, prepare for setbacks and commit to rewarding yourself when you’ve reached a goal. Become proactive, not reactive.

Emotions also play a huge role in creating success. Think about how you’re going to feel when you achieve your goals. I mean really think about it. Are you going to be happy and proud? Are you going to be more confident and self-assured? And think about the opposite also. How will you feel if you don’t follow through? (This is going a little “The Secret” on you I realize, however there is something to all that visual reinforcement stuff and the law of attraction.) I write little goals on post-it notes so that I’ll see them everyday to reinforce my goals and determination. (Is that admitting I’m a secret “The Secret” groupie?)

Also highly recommended is working on breaking down your ultimate goal into smaller goals. Little achievements go a long way in helping to keep you motivated and your goals at the forefront of your mind. Lets face it, somewhere around February 28th, resolutions seem to fade away. Gym’s see less and less of a jam in the parking lot (and on the treadmills). Something gets lost between being excited about making changes in the new year and February. What is that?? Keep your goals small, attainable and realistic and you should have a much easier time this year attaining them.

In the end, the more positive the light you can shed on your goals, keeping them attainable and allowing yourself a little slack for screwing up at times, the better off you will be, both mentally and physically. Let’s be honest here, we’re all human and we’re prone to make mistakes, to fall off the wagon and to get frustrated. It’s the ones who can keep seeing things in a positive light that pick themselves up again and keep moving forward. May this be the year that you’re able to create positive emotions, build up new habits, and achieve great success!