It’s a marketer’s dream when a company’s operation remains true to its original concept and business model and when that concept impacts every aspect of the business. Such is the case with Wowgreen, International.

Headquartered in Dearborn, Michigan, Wowgreen was launched approximately twelve months ago.  Wowgreen provides safe, green household cleaners that are sold and distributed to consumers through a network of independent distributors. The company’s mission is to “free the world of toxic chemicals, one household at a time.”

I met with Frank Dias, Vice President of Sales, and Matthew Gulotta, New York distributor, at a recent sales meeting at the Doubletree Hotel in Tarrytown. The energy was contagious, the motivational and inspirational speeches would make Billy Graham proud, but what was most powerful to me was that these people not only believed in their products, they lived the product story in their everyday lives. Many of the distributors came wearing backpacks, drank from recycled water bottles, and carried recycled shopping bags. It was a “green army” and they were ready to fight all things “not green,” fulfill the promise of a “greener world,” and truly help to “make a difference and make the world a better place.” 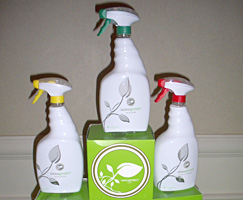 The company supports them 100 percent. They do this by providing innovative, green products that are sold in recyclable containers and printed with environmentally-safe ink, by refilling orders with a refill pack version of the cleaner (which is later mixed with water) so as to not ship a water-based product thus cutting down on fuel, and by supporting their distributors through a fundraising program. The fundraising program is designed to reward both the charity as well as the distributor for their efforts.

The most moving part of the meeting was when one of their distributors gave a presentation on his fundraising effort in Haiti and told of how quickly the company and his fellow distributors came to his aid. Dave Bowlby is a distributor from Spring Valley and a Director for Feed Them Ministries, a chapter that helps educate and feed the children of Haiti. He has been doing this for over nine years.

After the earthquake, Mr. Bowlby called upon his customers and other distributors; by spreading the word and knocking on doors, they were able to gather and take to Haiti thirty-four bags of badly needed medical equipment and other supplies. Mr. Bowlby flew to Haiti with a group of individuals and traveled to the schools and other areas to help set up and assist in the medical relief tents.

While there they met up with a 24-year old man, Jovins Dorestan, who is an amputee. They brought him back to New York and he is now at Good Samaritan Hospital waiting for a prosthetic leg and subsequent physical therapy. Mr. Bowlby’s fundraising continues for Mr. Dorestan and his medical treatment needs. What a testament to the character of this company. The company web site also has a link to the Red Cross relief effort and cites and commends Mr. Bowlby’s efforts as well — and it doesn’t stop there. Until March 31st, for all orders from wowgreen.net/begreen, 10 percent of sales will be donated to Dave Bowlby at Feed Them Ministries, to provide much needed care. Mr. Bowlby will be traveling back to Haiti by the end of February, and on February 20th and 21st,  the Doubletree Hotel in Tarrytown will have a staging area at the front desk, collecting supplies and tents for Mr. Bowlby to take to Haiti in preparation for the rainy season.

(Note: Subsequent to writing this story, I have come to learn that Mr. Dorestan has been transferred to Helen Hayes Hospital where he will undergo surgery for a prosthetic leg and will receive rehabilitation. After the rainy season and when Mr. Dorestan has successfully completed his rehabilitation program, Dave Bowlby will reunite Mr. Dorestan with his family in Haiti and will help to relocate the family to the city of Paillant.)

It’s rare that a company’s promise to “pay it forward” is fulfilled, and that their mission statement is embodied in every aspect of their business operation. It seems to me that Wowgreen has it figured out — one household at a time.

About the Author: Lisa Lindsay