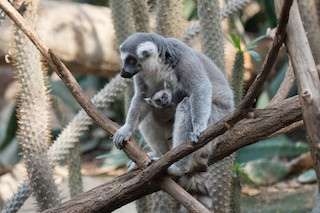 Guests hoping to catch a glimpse of the new additions will have to observe closely as young lemurs cling to their mothers and nestle in their fur.

The Bronx Zoo has had tremendous success breeding lemurs as part of Species Survival Plans, cooperative breeding programs designed to enhance the genetic viability of animal populations in zoos accredited by the Association of Zoos and Aquariums (AZA).

WCS works to save lemurs and their disappearing habitat in the African island nation of Madagascar – the only place in the world where lemurs are found in the wild. Brown collared lemurs are native to the tropical forests of southeastern Madagascar. Ring tailed lemurs are native to the forests and bush in the south and southwestern portions of the island. Their habitats are being destroyed by human activity including charcoal production and slash-and-burn agriculture.

Ring-tailed lemurs are very social and live in large matriarchal groups that often contain several breeding females. They are capable climbers, but spend much of their time on the ground. Newborns will ride on their mothers’ chest and back for the first few weeks and will begin move around on their own within two-to-four weeks, but still stay close to their mother.

Collared lemurs use their long tails to balance when leaping through the forest canopy. They live in groups of males and females but are not matriarchal like many other lemur species. The young ride on their mother’s back hiding in her fur for the first few months of their lives. 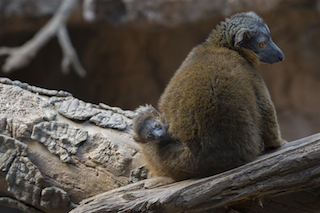 All lemur species are in trouble due to devastating loss of suitable habitat. The International Union for Conservation of Nature (IUCN) classifies both ring-tailed lemurs and brown collared lemurs as “Endangered” in the wild.

Opened in 2008, Madagascar! educates zoo visitors about the country’s incredible biodiversity and how WCS and partners are working to save its wildlife and wild places.

About the WCS (Wildlife Conservation Society)

MISSION: WCS saves wildlife and wild places worldwide through science, conservation action, education, and inspiring people to value nature. To achieve our mission, WCS, based at the Bronx Zoo, harnesses the power of its Global Conservation Program in nearly 60 nations and in all the world’s oceans and its five wildlife parks in New York City, visited by 4 million people annually. WCS combines its expertise in the field, zoos, and aquarium to achieve its conservation mission. Visit: newsroom.wcs.org. Follow: @WCSNewsroom. For more information: 347-840-1242.