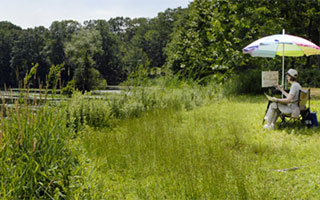 Everyone has been impacted by the numerous hurricanes and so called hundred-year storms that seem to come our way every year.  The toll on everyone, with pictures of massive destruction and personal lives disrupted, weigh heavy on all of us. However, there is a sector of our environment that has been ignored.  While no one minimizes the human cost, both physical and emotional, of these storms, likewise no one has really assessed and understands the generational damage to our environment … namely, our parks and woodlands.

Rockefeller State Park is a gem.  I know it personally because I was born and raised in Sleepy Hollow and have lived here all my life.  My “backyard” opened to the Rockefeller Estate where, even as a kid, we walked, played, and explored pristine woodlands. The park preserve is a legacy of the Rockefeller family and a gift to all of us.  However, the Rockefeller State Park Preserve suffers from the very legacy of its namesake donors.  With the new park being New York State property and under the State park’s domain for maintenance, the recent storms have destroyed whole areas of specimen trees, fields, and the network of bridal paths and walkways without let-up.  There’s nowhere to turn to care for, replenish and rejuvenate this gem.

It’s a misnomer that any facility that has the Rockefeller moniker attached to it should be weathering (no pun intended) the twin effects of storm damage and the current economic distress.

Face it … we’re only human and we’ve grown accustomed to enjoying other people’s property – in this case, the ability to walk through the park preserve without financial cost or care.  The park needs additional financial donations to maintain the high level of care once provided by the Rockefeller family.  People come from far and wide, drive up from out of town and park along local roads, take the train and then walk through the area. Never once are they asked to pay a fee, donate even a few dollars, or be enlisted in the care of this unique facility.   Local residents still consider the Preserve as our backyard: I am guilty, I still do also.  NYS funding has atrophied inverse to the real cost impacts of  recent storms.  It hurts all of us.

It would be easy to say that people should donate to the Friends of the Rockefeller Park Preserve … and that is an obvious solution.  So do it.  But what I am proposing is that with all of the FEMA and SEMO (the NYS agency) monies released, some of these awards should be allocated to a Nature’s Fund: to shore up, to repair, restore, and, maintain these park lands.  It doesn’t have to be a lot of money.  If the State and the Federal governments were to allocate but 1% of the millions of dollars being directed to New York State alone, an enormous amount of money could be set aside to reinvent a 21st Century version of President Roosevelt’s Civilian Conservation Corps (CCC) that addressed parallel national issues some 80 years ago.  Each 1% of a FEMA million dollar award is $10,000.00. This might seem a small amount, but when you understand that the FEMA/SEMO awards will be in the billions, then you understand the power of numbers and the potentials. These funds could be allocated to preserving our park lands by clearing and cleaning these parks, and by eliminating dead, diseased and damaged trees:  all dangerous to park users.  The added benefit would be the creation of meaningful jobs and restoring the vitality of our parklands and preserves.  Come on:  how much of these FEMA/SEMO funds are lost in “governmental administration,” anyway?

Don’t think this as a “pie in the sky” type of proposal.  Our elected officials, who relish in directing “home-town” projects and grants, also need to understand that the legacy provided by others, even the Rockefellers, needs to be cared for by all us for future generations.

The economic effects of our current condition have drained the funding for even the most routine of maintenance in our parks.  Indeed, park funding is the first to go during times of distress … yet these “free zones” have increasing numbers of visitors: that’s what happens when economic times are tough.  It might appear counter-intuitive, but it’s true.

I believe that this modest proposal could be a bridge to jumpstart the clean-up, repair, and enhancement of our park lands. As important in real terms that this might appear, it’s something that future generations can learn from us: the need to provide adequate funding to preserve these lifetime heritage sites.

About the Author: Philip E. Zegarelli