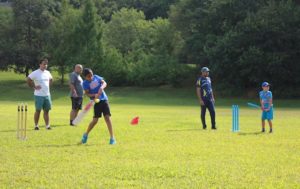 A new notch in Westchester’s history was created this summer with the Town of Greenburgh’s installation of a cricket field at Richard Presser Park in Hartsdale. The cricket pitch is the first of its kind in the County and stands as a testament to what can be achieved when the electorate and the elected work together.

Although cricket is the second most popular sport worldwide after soccer, in the US it is still just picking up steam. Longtime Greenburgh resident and life-long cricket player, Dr. Jitendra Barmecha, along with a handful of other local cricket enthusiasts tabled their request for a cricket playground at a Greenburgh town hall in January. They found a receptive audience in Town Supervisor Paul Feiner, who with the help of Parks and Recreation Commissioner Gerard Byrne, took the plans of the citizen cricket committee and brought them to fruition.

“It’s really been great,” said Feiner in an interview with the River Journal. “People want to feel that they are a part of a community and listened to. It makes people feel good about government.”

Encouraged by Feiner to get involved in the civic process two members from the cricket committee, John Sunkavali and Amit Saxena, now sit on the Parks and Recreation Advisory Board.

Dr. Barmecha thinks the other reason the municipality created space for cricket is to address a recreational need in the community.

“Cricket is another outdoor sport to engage in, in addition to baseball and lacrosse,” said Barmecha, who is Southeast Asian and learned to play cricket almost as soon as he began to walk. He wishes to spread his life-long passion for cricket within Greenburgh and the surrounding communities. “We formed a not-for-profit organization so we have a collective voice rather than an individual voice. And we just want to do the right thing for our children and the community.”

The non-profit is 22YardsSport, and organized Westchester’s inaugural cricket tournament on September 22 where 9 teams competed and some 200 people attended. Buoyed by this enthusiastic response they promise more structured cricket programs in the upcoming season April – October 2020.

“We want to continue momentum, not lose steam, so that next year we are prepared even bigger and better. Next year we would like to have a very structured kids’ cricket clinic, we have plans to do a camp during the summer, cricket yoga, and for seniors we will be developing some educational seminars,” Barmecha said.

As a medical professional, Barmecha wants healthy outcomes for all and prescribes outdoor activities at every age. However, Barmecha points out that cricket is also a social activity the whole family can participate in. “It’s a game of pediatrics to geriatrics,” he said.

Since the United States this year became a member of the International Cricket Council (ICC), Barmecha said, “You’ll be hearing and seeing more cricket in this country. There are some states which are ahead of New York. In New Jersey, there are more than 18 clubs. And in all boroughs of New York City, they have a dedicated cricket ground now.”

With almost 20 clubs now in Westchester playing cricket and 22YardsSport exploring more grounds for cricket pitches, this may become a reality in Westchester too.

For now, if you would like more information on cricket in Greenburgh and the surrounding areas visit 22YardsSport.com.

About the Author: Wendy Mbekelu