The catchy lyrics and memorable melodious music of Happy Days Are Here Again echoed through the large meeting room at Cortlandt Town Hall.  It was a sunny September Saturday afternoon outside as an audience of more than 50 people inside tapped their feet and nodded their heads in unison with the beat of the enduring song from Franklin D. Roosevelt’s 1932 presidential campaign.

As members of the tri-sponsoring Van Cortlandtville Historical Society, Yorktown Historical Society, and Croton Friends of History, passed out red, white and blue FDR campaign buttons, the music blared on as the lyrics trailed off:  The Skies Above Are Clear Again, Let Us Sing a Song of Cheer Again, Happy Days Are Here Again!

Author/historian Anthony Czarnecki of Cortlandt Manor stepped to the microphone and opened his historical PowerPoint program— Nothing to Fear When FDR Was Near: A Look Back at the Iconic President’s 24 Visits to Westchester.

“Franklin D. Roosevelt was no stranger to Westchester County. He was our longest serving president and the only one who was born and raised in the Hudson Valley region of New York State,” Czarnecki said, noting that for FDR, our county was the midway point between the family estate at Hyde Park in Dutchess County and the Roosevelt townhouse on 65th Street in Manhattan.

Over a period of 20 years, FDR got to know the people and places of Westchester County as undersecretary of the Navy; as a candidate for the U.S. Senate in 1914, for vice president in 1920; and for governor of New York in 1928. Then, as governor, when he became the presidential candidate in 1932, and thereafter elected four times as president.

“But, unlike any other president, FDR experienced three of the most overwhelming burdens faced by any leader in modern history – infantile paralysis (polio) in 1921; the Great Depression during the 1930s; and World War II.  He managed these three overlapping challenges with characteristic optimism, evidenced by the spirit of a “Nothing to Fear” theme that he effectively communicated to the American people in his first Inaugural Address,” Czarnecki  explained.

“The first thing to know about this amazing story is that FDR’s connections to Westchester were numerous and personal,” he continued. “When his daughter and son-in-law, Anna and Curtis Dall, moved to North Tarrytown (now Sleepy Hollow) after their marriage in 1926, FDR would often have lunch or dinner with them at their Pocantico Hills estate after a speaking event.

And, as governor he delivered a major speech to the Westchester County Banker’s Association at the Briarcliff Lodge in 1930 on the threat of a collapse of the banking industry. Just before the election of 1928, he gave a campaign speech at Philipse Manor Hall in Yonkers on behalf of his political mentor, Gov. Al Smith of New York, who was the Democratic presidential candidate. 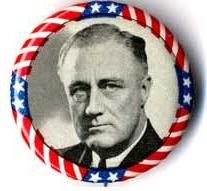 Gov. Roosevelt spoke at and reviewed New York National Guard troops approximately eight times at Camp Smith in the Annsville section of Cortlandt. He appeared there three times in both 1929 and 1930, and again in 1932 with upwards of 5,000 in attendance at those events along the Hudson River. He returned to Camp Smith as president in August of 1933 where 10,000 enthusiastic spectators watched him address and shake hands with all the officers.

Another notable visit to a Hudson River town was in August of 1932 when presidential candidate Roosevelt, accompanied by his vice-presidential running mate, John Nance Garner of Texas, laid the cornerstone at the New York State Armory on Washington Street in Peekskill with 3,000 in attendance. Through his detailed research, Czarnecki discovered and disclosed that this was the first time that the two running mates appeared together in person. FDR had invited Garner to join him at the last minute and then the two motored up to Hyde Park from Peekskill.

Czarnecki continued: “FDR’s presidency left a lasting legacy in Westchester County. The ‘New Deal’ funded over 60 construction projects in Westchester, using WPA or PWA funds to overcome widespread unemployment during the Depression. Those projects in our area included the Peekskill City Hall and Yorktown Town Hall.

“Today, two large public legacy sites honor FDR in our area: The FDR Veterans Administration Hospital in Montrose, which opened in 1950, and the FDR State Park in Yorktown (formerly Mohansic State Park),” Czarnecki said as he pointed out that FDR’s last appearance in Westchester County before he busied himself with national and world crises was on September 27, 1933, at the 250th anniversary celebration of the City of White Plains where 50,000 people greeted their new president on the streets of that city.

Czarnecki concluded his remarks: “Most national surveys of historians rank FDR among the top three presidents, along with Washington and Lincoln. Today, more than 75 years after his death, it is important to acknowledge that, over a period of 20 years, one of the three greatest presidents in American history came to know the people and places of Westchester County during his 24 public appearances here. Those memorable connections continue to educate and inspire us in the 21st century.”

Bob Foley is the program director of the Van Cortlandtville Historical Society. They Paved Paradise, Put up a Power Plant

About the Author: Bob Foley