“Really?!” That’s a typical reaction of people who learn that the current site of the now-decommissioning Indian Point Nuclear Power Plant once had a 100 foot-by-150-foot swimming pool for city folks to enjoy doing laps, rather than the current giant pool of water used to cool spent nuclear fuel rods.

Many local residents are unaware that Indian Point in the mid-20th Century was an amusement park, replete with outdoor activities, trails and horse racing, and later kiddie rides surrounded by concession stands hawking ice cream and hot dogs.

Vangor begins the story by taking the reader back decades prior to the construction of the power plant. Rare photos illustrate the leisurely life of Indian Point prior to its heyday of providing nearly 25% of the metropolitan area’s electricity.

There are photos of Day Liners steaming up the Hudson River and docking at Indian Point, with city dwellers disembarking to enjoy the cool breeze of open space, a dance hall, a swimming pool and outdoor activities.

The book features fascinating, vivid photos of the amusement park. While it was active for fewer than 15 years, Indian Point Park still is fondly recalled by Westchester residents now in their seventies. For several years during the 1950s, the location hosted the Westchester County Fair as well as the Christiani Brothers Circus. 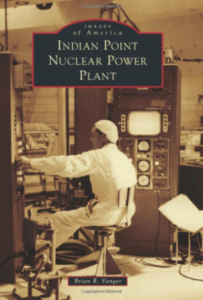 Brian Vangor, a longtime employee of the various operators of the nuclear plant, unlocks an archive of more than 100 photos that chronicle the construction of the plant.  Each photo is accompanied by a crisp narrative that gives the reader a sense of the historic nature of the building of the country’s first nuclear power plant.

While leaving the reader with an appreciation of the obstacles in construction, it also renders a clear understanding of harnessing the power of the atom to create electricity to serve Westchester and New York City. Sections of the book explain the purpose of scheduled outages and how operations are maintained through those periods.

The final chapter delves into the ultimate closure and decommissioning of the plant, under the management of Holtec International. Vangor also tells the human side of the Indian Point story, sharing many photos of employees and the various events designed to increase morale.

This book is a must for anyone who had any association with Indian Point, be they a former employee or relative or friend of a former employee.  Residents of Buchanan, Cortlandt, Peekskill and the area surrounding the plant should be interested too.

For years, those of us who resided in the “10-mile zone,” and grew accustomed to hearing the Indian Point test sirens periodically, we would simply shrug our shoulders and say, “Indian Point.” Now, with Brian Vangor’s exhaustive research and documentation, we have the opportunity to learn more about the complicated and controversial and, at times, even colorful history of “Indian Point.”

Among his varied, longtime contributions to Westchester’s civic vitality, George Oros is President of the Peekskill Museum.

About the Author: George Oros