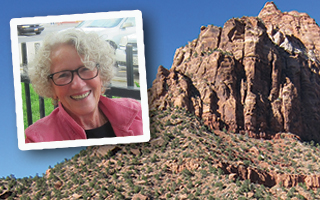 River Journal toured the  West this Summer and invited Jacquita Christensen to write about growing up there. Growing up in the West may include many things: surfing in California, forests in the Northwest, aliens landing in New Mexico and “show time” in Las Vegas.  But my home town of Kanab, Utah, was one of the most isolated towns in America in the early forties and before. 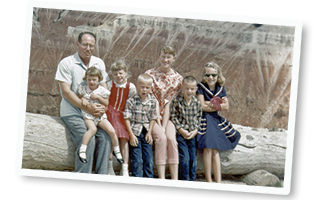 Only miles from the four corners area where state borders of Colorado, Arizona, New Mexico and Utah converge, the land is marked by red sand and sage brush.  The Mormon pioneers were alone in settling Utah; everyone else was passing through on their way to somewhere else. Kanab was a lonely outpost where my ancestors and other stalwarts made their meager homes.  The town was isolated, innocent and small which led to a carefree childhood.  My father was a sheep rancher, as was his father before him and his father as well.  They were pioneers who settled Southern Utah with harrowing tales of drought, flood, plagues of grasshoppers and crickets, hostile Indians and the solitude and adventures of the desert wilderness. My mother was a school teacher, refined and educated in the cities of Northern Utah.  She and a girlfriend agreed to teaching positions in Kanab sight unseen.  When they arrived with their belongings packed in mother’s little black Pontiac, named Romeo, the electricity was out all along the southern valley, and they wondered what they had gotten themselves into. During those early years Kanab had no planes, no trains, no radio stations or supermarkets.  There was one doctor (named Dr. Aiken), a telephone operator who knew the entire town’s business, horses tied to fences and chickens, cows, and livestock in abundance.  All twelve grades went to school in the same building which was beautifully built on a hill at the east end of Main Street.  It was the first thing seen when driving into town. Zinnias bloomed up both sides of the front lawn for the first day of school, and we loved it. We kids wandered the town, hiked the hills, found watercress beside the small streams, found
cliff dwellings and petroglyphs.  We knew the neighbors and ran wild all evening playing Hide and Seek, Kick the Can and Run Sheep Run.

We dressed up and decorated our bikes for every parade. We put on our father’s white shirts and our sunglasses and danced to Elvis Presley records influenced by a glimpse of the wider world.  We were a community and the community raised us all.  Once in a while an Indian came into town from the reservation and that was the extent of our ethnic diversity.  We once found a $20 bill on the town square after the carnival left, and it was more money than we had ever seen! 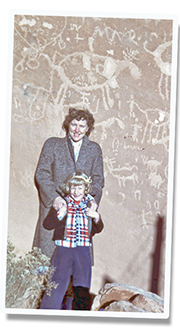 To the north of Kanab is a great white butte called Diana’s Throne where my father proposed to my mother while they were herding the sheep to the winter range on the Arizona Strip.  There are miles of coral pink sand dunes where one could be lost in the solitude or frightened by visions of Lawrence of Arabia approaching over the next hill, and where the extended family often picnicked with a dutch-oven dinner while the sun set over a distant golden Zion National Park in the west.  Grand Canyon National Park is just over an hour in the opposite direction over the Kaibab Plateau with gorgeous ponderosa pine trees (where we chewed up crumbly pine sap into what some called gum), and pinion pines (where we harvested pine nuts if we beat the squirrels to them).  About the same distance to the north Bryce Canyon National Park can be found with its million knobby spires in varying shades of white/pink/orange/red surrounding one for miles as you foray on paths down into the canyon.  “It’s a hell of a place to lose a cow,” the first explorer said.

Monument valley with its eerie monoliths was just over the Arizona border.  The Glen Canyon Dam and Lake Powell, the Grand Staircase Escalante Wilderness and Canyonlands have more recently
een added to the Color Country experience in Southern Utah and Kanab.

Kids from all over the United States came to the National Parks to work for the summers.  My father, as a Bishop for the Mormon Church, held Sunday services at the various parks, and I went with him.  So almost every week my religious experience was the grand beauty of visiting those national parks:  standing out on Bright Angel Point and watching the colors change in the depths of the Grand Canyon or driving the switch-back highway and looking out of the windows of the tunnel to see the stalwart Great White Throne, the Sentinel and the Three Patriarchs before descending to the bottom of Zion Canyon for lunch at the Lodge. Bryce is higher and colder, but the air is crisp and clean and smells of pine.  Later in my travels, I met a French climber in the Annapurna Sanctuary in Nepal who had been to Bryce Canyon; she thought it the most glorious spot on earth and could not believe how lucky I was to live nearby.  The Union Pacific Railroad built the stately log lodges at each park, and these grand structures continue to amaze the tourists.

[blockquote class=blue]“We will never forget the red sand in our shoes and the thought of red cliffs held warmly in our hearts.”[/blockquote] 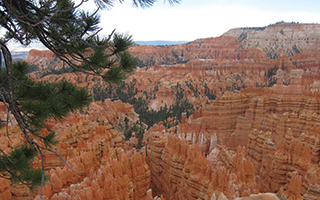 The scenic diversity and beauty of Kanab and surrounding country was not lost on the movie industry.  They filmed so many movies and TV shows in our environs it was second nature to mix with famous movie stars.  When the hometown movies were shown in our small movie theater everyone would jump up and identify themselves on the screen.  Our cleaning and laundry establishment gave ample opportunity to be in the forefront of the action.  When Hollywood filmed the Lone Ranger TV show, I had to sew up several pairs of the Lone Ranger’s pants every night for the next day’s filming.  There was no stretch in the fabric in those days, and getting on a horse in tight pants was never easy!  If you remember Alan Ladd in the movie Shane, my friends and I were the hub of his fan club.  We would pick him up in my black Plymouth at the Parry Lodge and drag Main Street with banners and balloons and honking our way to fame.  The movie stars danced with us at church dances in the town hall and bought us sodas at the drug store soda fountain.  One movie star flew to Kanab in his own plane cropping the tops of the Elm trees surrounding the school and alarming us all.  It is rumored Clark Gable came to my father’s send-off for his Mormon Church mission as it was the only party in town.  One would see Frank Sinatra sauntering down Main Street or the Rat Pack entertaining themselves and all of us.  The town folks were extras in the movies; they provided cattle, horses, ranches, food and lodging.  I personally ironed tuxedo shirts for the stars for years.  We helped Uncle Bybee clean uniforms for armies over night, every night; we mangled (ironed) sheets for the motels and helped solve all kinds of costume difficulties.  It was fun!  Rhonda Fleming, a red-haired beauty of yesteryear, was married in our red rock church.  I looked exactly like her in surreptitiously trying on her wedding dress as it had her ample body contours sewn right in it.  I stitched a new pocket in one of the movie guy’s pants, and he brought me what we would now call a “Big Gulp” from the drug store.  After tasting it, I called Aunt Lola over and said, “I think he brought me Bourbon.”  She tasted it and with a twinkle in her eye and a big smile on her face she said, “It’s only Coca Cola!” 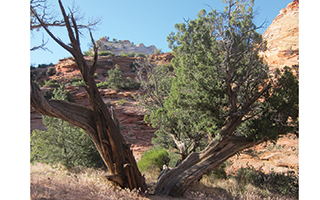 Every year Kanab hosts the “Western Legends Roundup.”  Festivities abound with cowboy poetry and music, and old movie stars return to sign autographs, reminisce about the good old days and mingle with town folks, and about 5,000 tourists, for a “Chuckwagon Cookout” breakfast.  Booths line the streets with homemade quilts and other handicrafts, food, interesting artifacts and information groups about water and the environment.  Members of high school graduating classes return to Kanab to join in the fun and reconnect. There were 27 of us who grew up together through the twelve grades in the grand old school house on the hill; we graduated in 1958. At the Legends celebration we will don our cowboy boots and hats and ride in a wagon for the High Noon Parade down the same Main Street where we hung out as teenagers. Our numbers are dwindling, but our spirit remains the same.  As the ages have taken us through many countries of the world and on to different careers and adventures, we still know friendship and welcome genuine concern for one another.  No matter how many years go by or how many miles we travel, memories of our childhood and our school days remain.  We will bring our kids back to the national parks and the sand dunes to instill in them the beauty and contentment we remember.  We will never forget the red sand in our shoes and the thought of red cliffs held warmly in our hearts.