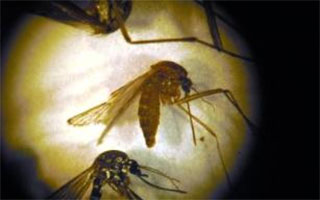 The Health Department will continue mosquito surveillance efforts throughout the county, as well as in the area where the positive mosquito batch was found.  These efforts will include mosquito trapping and testing as well as surveying catch basins for mosquito larvae or standing water. No standing water was found near the trap site. In the surrounding neighborhood, 62 catch basins were reinspected and 10 were retreated with larvicide.

The Health Department prepared for the summer mosquito season by applying larvicide to catch basins throughout the county in an effort to prevent the spread of mosquito-borne diseases such as West Nile virus.

The Health Department is recommending that residents:

Avoid the outdoors in the late afternoon and early evening when mosquitoes are active and feeding and use insect repellents when outdoors during these times, and be sure to follow the instructions on the label.  Adults can apply insect repellents with up to 30% DEET on infants over 2 months of age by applying the product to their own hands and then rubbing their hands on their children.  Products containing DEET are not recommended for use on children under 2 months of age.

Wear protective clothing such as long pants, long-sleeved shirts, and socks when outdoors in areas and at times where and when mosquitoes are active and feeding.

Residents who notice large areas of standing water on public property that could serve as potential mosquito breeding grounds should report this information to the Westchester County Department of Health by calling (914) 813-5000 or emailing the Health Department through its website, www.westchestergov.com/health.