Campus was bursting with activity and excitement as hundreds of campers swam, crafted, cooked, hiked, laughed and played together for Pocantico Hills Day Camp’s 65th season.

“It’s been a long time since we’ve been all together and the energy and the excitement are just amazing,” said camp Assistant Director Kerry Papa, who runs the program with Director Ryan King. “You can feel it when the kids arrive in the morning. Everybody’s just really full of excitement and energy.”

Total enrollment was 332 children, although not all attended all six weeks. There were plenty of on-campus activities, visits, theme days and trips for campers. For example, the Bubble Bus kicked off Color War Week; the Harlem Wizards and the Sandbox Theatre performed at Pocantico; and younger campers took part in on-campus “sleep-unders.”

Rising seventh-grader Kieran Degen sported a green party hat for Crazy Hat Day as he played gaga ball one day. “Camp is really awesome because there are so many activities that keep us active,” he said. “There’s never a time where we’re bored. It’s always really fun.”

Poco Camp 1: Staff and campers pose for a photo after getting a treat from 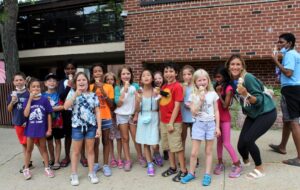 an ice cream truck that visited campus on the penultimate day of camp.