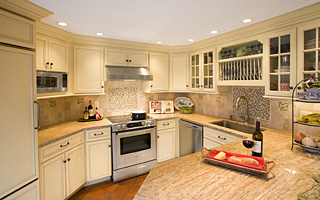 From  the Stone Age to contemporary times, whether we are spearing a wild boar and throwing it whole onto a raging fire or savoring “crab risotto with a hint of truffle oil” at the trendiest new restaurant, how we procure, prepare and eat food is a primary human concern.    Every culture has its own mores for preparing and consuming food and, currently, on view at MoMA, there is an exhibition that challenged me to contemplate our contemporary culture’s way with food.  Called “Counter space – Design and the Modern Kitchen,” the exhibit illuminates the design development of the kitchen in the 20th century.

The introductory placard poses the question: “Meal Machine, Experimental Laboratory, Status Symbol, Domestic Prison, or  The Creative and Spiritual Heart of the Home…How do we view the kitchen?”  There is no right or wrong answer. Any of us who cook regularly have probably experienced all of these perspectives on the kitchen at different times!

Prototype of the Modern Kitchen

The centerpiece of the exhibition is the newly acquired installation of the Frankfurt Kitchen, designed by German architect Margaret Schutte-Lihotzky in the 1920’s (see photo).  Originally designed and mass produced for a public housing project in post World War I Germany, this kitchen model proved very influential,  setting the course for kitchen design which continues to the present.  The layout of the kitchen is still surprisingly modern and, for the apartment space for which it was intended, the basic design probably cannot be much improved upon.  Counter space, upper and lower cabinets, refrigeration, garbage, and storage for food and cooking equipment are all integrated into the plan in much the same way that contemporary kitchens are designed.  One big difference is that the food storage pre-dates our modern predilection for processed foods with all the attendant packaging so that items such as flour, beans, coffee, sugar, and the like were stored in bins rather than cabinets. Other than that and the lack of a dishwasher, the design remains decidedly modern.  Interesting that this kitchen design with such staying power was created by a woman – one who probably cooked;  many’s the time that I have heard complaints about kitchens designed by male architects who clearly are more into looks than cooks!

Following World War II, Schutte-Lihotzky’s innovations really caught fire in the US when  the consumer revolution began in earnest.  We added more labor-saving devices/appliances  as well as a large dose of advertising fantasy  promoting  the concept of the “dream kitchen.”  All these factors combined produced the basic model of the kitchen that we are still using in this country.  Consumerism flourished in the post-war  50’s;  the fantasy and efficiency aspects are highlighted  in a TV clip entitled “Frigidaire Finale”  from the MoMA exhibit  featuring an ad for Frigidaire appliances in which a couple literally performs a wordless ballet sequence while showing off the line-up of  kitchen appliances.

If you visit the MoMA website, you can view a number of videos showing ads and film clips illustrating America’s romance with the new kitchen and with consumer goods in general.  One of my favorites, however, deals with the nuts and bolts and the substantial benefits of good kitchen design.  It is a short film put out by the US Department of Agriculture aimed at a farming audience (“A Step-Saving Kitchen”).   Thoughtful kitchen design is all there, even ergonomics which we think of as a new concept.  The kitchen is divided up into work zones and the utensils needed are placed close at hand; the amount of counter space needed to fulfill various tasks is measured out;  the then new innovation of the revolving corner cabinet is introduced; there is a garbage hatch built into the counter; dishwashing accoutrements are stored at counter height in a sliding cabinet behind the sink for easy access;  and each area is designed for maximum efficiency.   This is a very hard-working farm kitchen where the woman of the house would have done more canning, freezing and baking than is the norm for most of us, however, from a strictly functional point of view, this kitchen would be hard to improve upon even for our purposes.  I recommend looking up the film on the MoMA website if you are planning a kitchen; if nothing else, it will get you thinking about how you can better utilize your kitchen.

Aesthetically of course, we have seen vast changes since the 50’s.  Formica countertops have been replaced by a plethora of other options: granite, composite stone, wood, stainless steel, even glass.  Colors and tile treatments have gone in and out of style.  Lately, kitchen designers have been touting sustainable materials – bamboo cabinets, cork floors Brisbane, recycled tile or even latest items such as a kitchen backsplash tile.  Islands and peninsulas frequently replace the old kitchen table but these are all stylistic elements that, while they have dramatically altered the appearance of the kitchen, they have not had much impact on the basic working  area of the kitchen – the  design from the 50’s still persists.

There is no denying  that gadgets and appliances have made our kitchens more efficient than ever.  Dishwashers were only just being introduced in the 50’s and now we feel deprived if we don’t have one.  Microwaves, steam ovens, refrigerated drawers, convection ovens, self-cleaning ovens, induction cooktops, cuisinarts, blenders and all manner of other gadgets have proliferated;  everyone has their favorites  and some  just take up space. I tend to doubt that any of this makes us better cooks; a good cook can create a masterpiece with a couple of sharp knives and a hot plate, but that doesn’t seem to be the point for us.  It’s all about being efficient and having the dream kitchen …if we own all the right stuff, then surely we will happily (and efficiently) produce culinary masterpieces.  Speaking of the dream – there is another video clip from  the 50’s on the www.MoMA.org   website  that is utterly charming – an inspired reverie on possibilities of  technology called “Design for Dreaming”  where the kitchen is presented as totally automated – appliances appear and perform at the touch of a button.  The kitchen, seemingly on it’s own, bakes a cake while the carefree housewife is out playing golf and shopping.  She returns home to a perfectly baked and frosted cake with birthday candles already in place!  Such was the promise of technology in the 50’s. People actually  looked forward to a time in the future when they would have more  leisure time than they knew what to do with – a naïve hope from our perspective.  To those of us who aren’t technologically minded, it seems that we are slaves to technology rather than the reverse.

One new element in kitchen design that I find heartening is the longstanding trend towards making the kitchen part of a “great room.”  With the advent of refrigeration and venting in the 20th century, the kitchen was no longer the smelly, smoky environment that had to be exiled to the far reaches of the house.  The eat-in kitchen phenomenon gradually morphed into the kitchen as center stage and an integral part of the family experience – even the entertaining experience.  The kitchen has now  become the all-purpose room.  Family members not only eat in the kitchen, they watch TV, do homework, pay bills, read, and just hang out.  What little we have left of communal life tends to take place around the kitchen and that’s something to encourage.  Here is where we shine with the “Heart and Soul” aspect of kitchen.
Ironically, the downside to the modern kitchen is really the food.  Many a beautifully designed and meticulously fitted out kitchen is underutilized.  There are plenty of exceptions but, often, the microwave is the hardest working appliance in many of the kitchens I see.  Although liberated from much of the drudgery involved in cooking, people are too busy to cook and instead rely on pre-packaged, processed convenience foods.

Last but not least,  the MoMA exhibition turns its attention to how the kitchen is portrayed by artists.  Drawing from their extensive library, many film clips of kitchen dramas are included – some funny, some curious and some very dramatic.  Social commentary abounds: the isolation of the woman in the kitchen; the mindless consumerism; the art value of the Brillo box and Campbell Soup can as re-invented by Andy Warhol;  a spoof on Julia Child and some just plain funny cartoons – it’s all there.  The relatively small space devoted to the exhibition belies the depth and breadth of the subject matter; it’s an exhibit with equal appeal for the housewife and the social historian.  If you’re interested in seeing any of the videos referenced here, go to www.MoMA.org , locate the exhibition, enter the “Visons of Plenty” tab and scroll down to find the videos. Take a look!

[blockquote class=blue]Barbara Sternau is an Interior Designer  with offices at 4 South Washington Street in Tarrytown. Her email is bsternau@optonline.net  or visit her at www.barbarasternau.com.[/blockquote] About the Author: Barbara Sternau