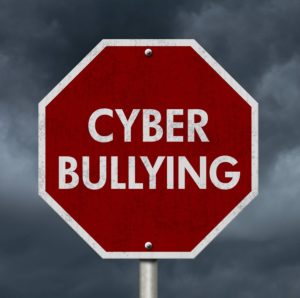 Most of us remember being teased or even bullied as children, or we were aware of other kids being bullied. The aggressor generally needed an audience, and the audience was usually limited by the size of the room, playground, or interested parties. But if the bullying was addressed adequately, teachers and parents could prevent a recurrence by separating the children, punishing the bully, or redirecting the victim into other groups and activities so as not to cross paths with the meaner kids.

Today, bullying is disturbingly prevalent on social media, group texts, and the like. A 2018 Pew Research Center study looked at smartphone and social media use among teens and found that there are mixed feelings about the ubiquitous nature of technology and social media in their lives. Of the teenagers who participated in the study, 95% had access to a smartphone. 45% surveyed reported they were online “Almost Constantly,” up from 24% in an earlier study only a few years prior. The teens with mostly positive feelings about social media cited enjoying things such as connecting with friends, meeting new people, and being able to look things up more easily. Of those who had negative feelings about social media, 27% said the main reason was bullying and rumor spreading. The second most common reason was seeing the lack of in-person contact as detrimental to interpersonal relationships.

I believe these numbers and agree with the teens’ complaints, such as the ability to bully from afar and including many more people. I see it with my young patients as well as with my friends’ adolescent children. One friend had significant problems with her middle schooler last year, when he was bullied through texts, left out of group chats, and tormented through other high-tech venues. One of my college-aged patients was excluded from some group chats because she had stirred up drama. The other girls called her names, became nasty about her mental health issues, discussed cutting her out of their friend group, and otherwise gossiped and sniped about her. When she saw the thread and what was being said about her, she felt betrayed. Gossip is not new, but in the past it was limited to people in your presence or at least one phone call at a time, sometimes blowing over before it got too far. But today, whether it’s middle school jealousy or sorority drama, it spreads like gasoline on a fire, often without one voice of reason to stop it before it goes too far.

Smart phones have changed everything in our lives. While most adults can be trusted to use their phones safely and sanely, society has reached a point where impulsive and naïve children have access to the entire world in the palms of their hands and can send digital communication to their entire school, but are often not policed. I remember once in middle school I decided, along with another student, that it would be a good idea to draw unflattering pictures of some classmates. Thankfully, in the days before technology, our teacher caught us, reminded us that we were not being nice, and demanded that we throw them out. We were being impulsive more than mean; we were not bullies, but we got carried away and acted mean at that moment, as many kids do. Today, we could have shared those pictures to our entire class within seconds and probably regretted it. Kids that age often need guidance to help them think before they act. Technology is so instantaneous that it leaves no opportunity for a voice of reason to ask, “Do you REALLY want to share that?”

When I work with kids, I advise them to stay away from drama and watch what they do and say on social media or in texts. In addition, they should do something if they or someone else is being bullied. Often kids think they can handle things themselves when they really can’t. And with so much in written text today, parents are not privy to overhearing conversations like they were in the past.

While I understand the perception that kids need to have access to cell phones and the Internet, it’s important to police your kids in similar ways to how you were policed as a youngster. Our parents answered the phone when it rang and had some sense of who was calling us. If I stayed on the phone too late, my mother would hear my mumbled tones from the next room and scold me to go to sleep—today a kid could be silently texting all night, and they often do, yes, even YOUR kid—and there is nothing to overhear to wake up Mom and Dad. Sometimes our parents read our diaries or listened in when we hung out with friends. And if we were getting bullied, it was hard to hide it from adults. It may still be hard to hide, but before an adult knows what’s going on, it can spread to an entire school and the child can be humiliated.

If you have children who spend a lot of time on social media and cell phones, I recommend that you advise them of the following:

The technology we have today can be amazing. I keep in touch with friends who have moved around the world, I get news instantaneously, and I can look things up without breaking a sweat. But I’m not an impulsive 12-year-old who might have a momentary lapse of reason and release something into cyberspace that I will regret, and I know how to shut someone down who chooses to be mean, as I have lived long enough to know when to engage and when not to. It’s important to remember that bullying today is completely different than it was a generation ago, and the consequences can be greater, because instead of a small group of kids being involved, it can spread so far and so fast that a bullied child can become completely isolated in a matter of a day. Keep the communication open to better prevent such situations.