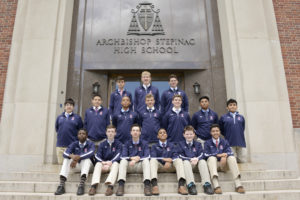 This year, Stepinac’s group of academically top students will tackle an even more daunting issue, one that impacts populations around the world — Climate Change.

The Symposium will be the first-of-its-kind-in-the-region high school forum on Climate Change and may very well be unique nationally.

The session, free and open to the public, will be held at 6 PM, Thursday May 30, at the school’s Major Bowes Auditorium, 950 Mamaroneck Avenue, White Plains, NY.

During the session, the students will share the results of their in-depth interrelated Climate Change studies and explore potential applications with a panel of experts.

The scope of the Climate Change Symposium projects includes:

The Health Sciences Academy students will start the Symposium by defining a specific climate change, i.e., global warming and what causes it. In addition, they will explain how climate change can impact the health of populations around the world in a variety of ways–breathing, mental health and allergies.  The students have also examined how climate change spreads vector (insect and other organism)-borne infectious diseases such as yellow fever and zika.

In addition to discussing how a disease enters the body and progresses, the students will present possible solutions they have explored for the prevention and spread of a disease.

The Finance and Economics Academy students will share the results of their analysis of two approaches to help reduce the “greenhouse effect” warming of the planet—either a carbon tax or cap and trade. The carbon tax is a levy on companies that produce emissions and serves as an incentive for them to invest in renewable sources of energy and discontinue being penalized with the levy. The cap and trade is a government-mandated, market-based approach that provides economic incentives for achieving reductions in the emissions of pollutants via a marketplace whereby companies that cut their emissions below the limit sell can either sell allowances to other companies whose emissions are over the limit or bank them for future use.

As part of their analysis of the two approaches, the students have also delved into potentially negative economic impacts such as the increased tax burdens on middle- and lower-income individuals and how they might be prevented.

The Law Academy students have studied how building and zoning codes can help mitigate the effects of climate change in vulnerable areas, particularly coastal communities that are threatened with rising sea levels and flooding. They will cite specific examples of how changes in the codes were instituted in the aftermath of such natural disasters as Hurricanes Katrina and Sandy.  In addition to exploring the feasibility and effectiveness of proposed building and zoning changes, they have researched the practices of other countries to determine if they can be adopted in the U.S.

The Engineering Academy students have assessed potential solutions to climate change on multiple fronts including: 1) arresting and reversing carbon levels in the atmosphere by creating  an affordable and easily reproducible commercial filter that can remove ambient carbon dioxide from the air and then re-direct direct it to plants growing in a sealed environment; 2) creating a model for a community residential project in which  all homes will obtain power from wind and solar and share with a local grid and 3) developing a model of the infrastructure that will need to be built to protect a low-lying area like Manhattan against future, devastating storm surges with anticipated increased sea levels in the years, 2050 and 2100. The distinguished panelists, who are experts in the Honors Academy’s four disciplines of economics and finance, health sciences, law and engineering, include:

Andrew Ratzkin, Esq. is senior vice president and general counsel for Burns and Roe Group, Inc., a provider of engineering, procurement, construction and maintenance services to power and water utilities. He has extensive experience in energy and environmental matters relating to development, sitting, permitting, and operation of electric generation and other facilities.  Recently, he authored an article that considers the case for a New York carbon tax. He is a graduate of Yale Law School and Brown University.

Mohab El-Hakim is an assistant professor in Manhattan College’s Civil and Environmental Engineering Department as well as an adjunct professor at the University of Waterloo (Ontario) where he earned a Master of Applied Science and Ph.D. in Civil Engineering Degrees. He is also a professional engineer in Ontario with nine years of industrial and academic experience. As a consultant, he worked on several infrastructure projects including airports, highways and municipal roads.

Dr. Rocco J. Lafaro, M.D. of White Plains is a Stepinac alumnus (Class of ’68) and a preeminent thoracic surgeon and medical instructor with more than 40 years of experience. A graduate of New York Medical College, Dr. Lafaro served as a long-time cardiothoracic surgeon with the Westchester Medical College Center, devoting some of his time as a teacher and mentor of medical students at Montefiore Medical Center at St. Barnabas Hospital.  Earlier this year, he became an adjunct instructor for the Stepinac Health Sciences Academy, instructing a group of students on the topic of bioethics, examining the role of ethics in primary care and other branches of medicine.

Damon A. Amadio, P.E., also a Stepinac alumnus (Class of ’80) and a long-time White Plains resident, is Commissioner of the White Plains Building Department. After earning a B.E. in Electrical Engineering from Manhattan College, Amadio began his career as a professional engineer, first with IBM where he served as project engineer. He then joined Edwards & Zuck P.C., a leading mechanical and engineering consulting company, as a project manager/associate and was promoted to partner. In 2000, he was named Deputy Commissioner of the White Plains Building Department and in 2008 was promoted to his current position. He manages a staff of 20 technical and administrative specialists, responsible for the enforcement of state and local codes associated with the use and occupancy of buildings on private property.

Frank Portanova, Vice Principal for Curriculum and Academic Studies, said that the Climate Change Symposium continues to fulfill one of the key goals of the Honors Academy that was launched three years ago—for the students “to see the relationship between their studies and their application to the real world,” adding: “The students have again mobilized around a very urgent and complex issue— the threats that climate change pose to human health.  In the spirit of enhancing the understanding of those threats and seeking solutions to lower risks now and for future generations, Stepinac’s Honors Academy is proud to invite parents and the community to join us for the year’s signature and solutions-focused academic event.”

About the Author: Frank Pagani