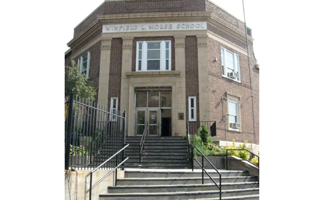 The stretch of Beekman Avenue that borders the Morse School between North Washington and Pocantico Streets in Sleepy Hollow is getting a whole new look for the fall thanks to a perfect storm of timing, aspiration, and opportunity.  The project initially sprouted to life due to the work of the Sleepy Hollow Downtown Revitalization Corporation (SHDRC), a non-profit organization founded in 2006 to help in the revitalization of downtown Sleepy Hollow. They had a $25,000 grant to go towards beautification of the downtown area, and came up with the idea of putting it towards the Morse park and playground currently adjacent to the street.

“They thought that it was such a centrally located place,” explains Sleepy Hollow Village Administrator Anthony Giaccio, “right on Beekman Avenue, that it would be important to beautify that area.”

However, the property is owned by the Public Schools of the Tarrytowns, so the SHDRC approached the District with their initial thoughts. As it turns out, the School District was looking at the possible closure of Tappan Hill at that time, and was contemplating moving first grade over to Morse for the upcoming school year.

Upgrading the playground area would be an important part of any such scenario. “We made the commitment…. when we made the arrangements to move first grade over [to Morse] that we would look for ways to make the whole site more kid-friendly,” says District Superintendent Howard Smith.

Soon after, the Village of Sleepy Hollow was brought into the discussions, and a plan was born. “The three of us – the School, the Downtown Revitalization Corporation, and the Village – got together, and we talked about ways of possibly improving that area,” explains Giaccio. 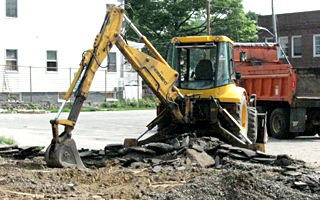 The current plans, drawn up by Village Architect Sean McCarthy, call for more playground space, the creation of a passive park, and turning the lower parking lot, which currently feeds off of North Washington, into a kid-friendly, AYSO-sized soccer field with a rubberized surface. The final design manages to unite the separate goals of the District and the Village into a single project.

The $25,000 grant secured by the SHDRC will be used to create a small park about halfway between the current play structure and the new play area bordering North Washington. The Village is providing in-kind work from the DWP to dig up asphalt, bring in topsoil, and put in plantings to prepare the area for the larger construction. “The Village’s primary goal is to beautify that area and also to make it appealing for kids and families to go there,” says Giaccio. “We have a strong [desire] to revitalize the downtown.” The end result should be a much more attractive and inviting stretch along Beekman Avenue.

“The School District is going to… install a soft surface play area, similar to the play area that was installed in Barnhart Park, where the current [lower] parking area is,” says Smith. The final design, starting at Pocantico Street and moving up Beekman Avenue, consists of the current play structure, followed by the small park, then the new play area which will consist of the AYSO-sized field and possibly more playground equipment. “We might move something from Tappan Hill,” says Smith, “since a couple of the structures there are fairly new.”

Aside from the $25,000 grant from the SHDRC and the in-kind work from the Village, the School District is shouldering the bulk of the cost of the project, making it a win-win for Sleepy Hollow. The cost of the play surface will be around $68,000 and contingency money from the existing school budget will be used. That contingency money had been set aside for transition costs associated with the school building consolidation, Smith noted. Says Giaccio, “It’s a minimal cost to the Village, and we’re going to benefit greatly from it.” Luckily, the work isn’t going to break the District’s budget either. “It turns out some of the other work that we thought would cost more, won’t,” says Smith. “So we’re able to move some things around and free up some money for the play surface.”

Aside from the new play areas, the District will be making some minor modifications inside Morse as well in preparation for the upcoming school year. The current, standard-sized lockers will be replaced with small half-lockers that are reachable for smaller kids, some of the bathroom fixtures will be modified to scale, doors will be tested and altered to ensure they aren’t too heavy to push, and new computer lab furniture scaled for little children will be added.

It’s all part of the process of readying Morse to welcome a new crop of first and second graders, as the workhorse school serves yet another grade level in its long life. It’s actually nothing new for the school, explains Historical Society Curator Sara Mascia. “[Morse] has been every grade imaginable. It’s changed a lot over the years.” Indeed, with this coming year’s addition of first graders, Morse will now have housed every grade from 1-6 and 9-12 during its lifetime, a thought which couldn’t have been further from everyone’s mind when the cornerstone, of what was then called North Tarrytown High School, was laid in 1922.

The internal and external renovations aimed at preparing Morse for its latest incarnation will be carried out over the summer. “I wouldn’t expect it to be complete much before the end of the summer,” says Smith. “Our goal is just to be ready by the beginning of the school year.” Once completed, the new park and playground areas will be open to the general public during non-school hours, adding another family attraction to the downtown area.

“We’re very excited about it, because it’s a full block; it’s the center of town,” says Giaccio.
“It’s going to beautify the area, and it’s going to encourage people to come to it and hopefully that will generate some economic activity.” Smith is equally happy that everything managed to come together. “It was a nice opportunity to do something in cooperation with the Village and we have the same objectives,” he says. “They want to do some things to beautify the street, soften it, and create more family-friendly areas, and we wanted the playground to be more kid-friendly/family-friendly. It should really change the look and feel of the place.”`