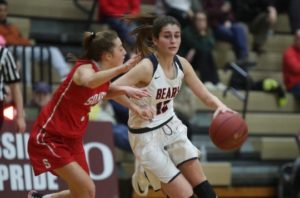 Alana Lombardi will be graduating from Briarcliff High School this spring, and her absence will likely be felt on the court, where she is the all-time leading scorer for her school among all players from either the boys or girls team. Alana will be attending Lafayette College in the fall, a school that was at the top of her list because of their strong academic and athletic programs.

Alana didn’t get into her dream school by luck. She has spent her years at Briarcliff working hard academically and athletically, while also finding time to work in the community. Alana credits her academic success to prioritizing her commitments, and managing her time to ensure that all her schoolwork is completed to the best of her abilities. Her coach, Don Hamlin, said, “Academically, Alana is at the top of her class, she has pushed herself to become an excellent student. Throughout her high school academic career, she has excelled in and out of the classroom. Every semester she has achieved high honor roll.” While Alana has shined across the board academically, she is specifically drawn to science courses, and plans to study engineering at Lafayette.

On the court, Alana is motivated by her teammates and is driven by her competitiveness, a trait that she perhaps picked up as the only girl in a household of three older brothers. Growing up, Alana particularly admired her oldest brother, Joe, as he also played basketball. Additionally, she wears the number 12 as a nod to her father, who once wore the same number. Of her playing this year, her coach has said, “This year she has improved her strength and ability to score and her rebound numbers have skyrocketed.”  Alana agrees that her rebounding has improved from last year, and believes this happened through the hard work she put in during the off-season, focusing on both strength and conditioning skills.

Outside of school, and off the court, Alana is still able to make time to be a part of the community. She is actively involved in donating school supplies, food and toys to local shelters, as well as helping her uncle coach youth basketball for elementary and middle school students. In the summer months, Alana will help her mom teach yoga at the Dragonfly Wellness Yoga Studio in Ossining.

Next year she will face new challenges, but will no doubt handle them with grace. much like she did when she was younger. When she first started playing basketball, she stood taller than her teammates and remembers that “my game was mostly shooting over girls, but as I got older I had to start developing guard skills … and I fell in love with being a shooter.” While Alana no longer stands as the tallest member of the team, she was able to adapt her skills with the changing environment, and in doing so, was able to improve her talents as a shooting guard – a shooting guard who now leads her school in all-time scoring, no less. As Alana continues to evolve , Lafayette is going to be fortunate to have both an academic and athletic star as a part of their initiation.

I balance community involvement, academic merit, and athletic commitment by prioritizing my studies. This helps me both in school and allows me to excel in my athletics. Community involvement is very important to me and I try to get involved as much as I can in my free time.

I am very competitive and this motivates me while on the court. I love to play my hardest and and succeed in playing my game when competing against the other team. My teammates also motivate me before every game and in tough situation.

My best accomplishment, in my opinion, is academic and athletic, and it is going to college and playing basketball at a dream school of mine, Lafayette.

The most rewarding part of achieving feats is that we achieved them together and each play a special and important role in them.

My oldest brother Joe and my father both inspire me to meet my achievements. The both of them believed in my true potential and motivated me from the start. My brother played basketball and he acted as a model player, I wanted to live up to his achievements. My father acted as my model coach and someone to always ask for guidance.

I involve myself in the community by donating school supplies, food, and toys yearly to a local shelter. Over the summer I help my mom teach yoga and help my uncle coach youth basketball.