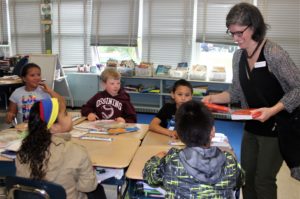 Following a 26-year-old tradition, a group of Rotary Club of Ossining members handed out dictionaries to third graders and thesauruses to fifth graders in Ossining’s public and parochial schools in late September.  Rotarians estimate they have given out about 1,400 books annually, totaling more than 32,000 over the years.

Children carefully wrote their names on the bookplates and started thumbing through the references.

“That’s a lot of pages,” third-grader Joseph Vera said as he flipped through his Webster’s Dictionary for Students.

Rotarian Marcia MacNeill told fifth-graders that club members hope the children will use the reference books and remember the organization. “Hopefully, when you are all superstars, you [will] remember that the Rotary gave this to you,” she said. “Maybe you can come and join our club and do the same for other fifth-graders.”

Student Megan Gilbert said the thesaurus will be very helpful with her vocabulary and writing as students learn more advanced words each year.

Student Malaki Drysdale said thesauruses can be handy if you’ve used a word several times and want to find an alternative. “I’ll probably use it a lot. I like to learn new words and stuff,” he said.