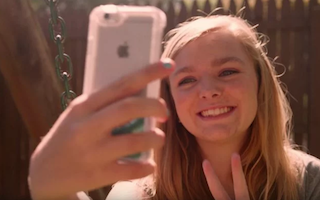 Most of us would not want to go back to eighth grade for any reason.  It was around then that I was described by a cute boy on my block as “pretty, I guess, in her own way.”  Ouch.  I think I did grow out of that description at some point, but still, ouch. When we see youngsters we care about muddling through this awkward period, we feel for them, because we remember what it was like to be 5’9 and 105 pounds (at least I do), or short, or have acne, or stringy hair, or baby fat, or braces, or whatever the thing is that is keeping us from feeling confident about our adolescent selves.  Adults may see the potential—I know I often sit in my office with an awkward adolescent and think to myself how handsome or pretty this child will be once out of that phase—but when you’re stuck in it, it’s hard to have any faith that you will come out the other side.

There has recently been a movie out called “Eighth Grade,” and it focuses on a teenager named Kayla, played by Elsie Fisher, a promising actress, in her last week of middle school before summer break.  The movie is both timeless, in that we all, regardless of how long ago middle school was, can relate to Kayla, and also specific to our current times, as Kayla uses social media, is constantly looking at her phone, and deals with issues characteristic of our modern times.  For example, Kayla films YouTube videos giving advice to other teens about things such as confidence, making friends, and being yourself, but then wins “Most Quiet” in her class because she hardly talks to anyone in real life.

The response to the movie has been positive.  Therapists who work with teens, as I do, have been raving about it and encouraging others to see it.  At an all-ages screening, adolescents reported feeling every emotion imaginable and thought that the movie hit the mark.  Their parents agreed that it brought up feelings of their own adolescence and was quite moving, funny, and thought provoking.

What strikes me most about the movie is not that teen angst is universal, though it is, but how differently it is handled today due to how kids communicate.  Indeed, I’ve been having conversations in my office lately about how different, and often absent, support systems are today.  When I was in the eighth grade I talked on the phone with my friends, played whiffle ball in the street, rode my bike, walked up and down the neighborhood chatting with my friends, had crushes on boys, flirted with them, learned how to respond when they flirted with me, felt disappointment and heartbreak, argued with my parents, began a love affair with classic rock music, drew pictures, wrote poetry, read lots of books, and generally interacted with a lot of people on a daily basis.  As a whole, my peers and I were rarely home until we had to be, and we worked problems out in real time, in real life, and dealt with the consequences.

So many kids I see today socialize mostly online or through some electronic medium such as texting, Snapchat, group chats, or social media.  This may be with actual friends from school or camp, but it is also often with kids they have never met IRL (in real life).  One young man I work with is not only shy and awkward, but in the process of coming out as gay, and feels he doesn’t fit in.  Many of the kids he opens up to he has only met online.  It is not unusual for them to cue up a movie to watch “together” from various American cities.  With the buffer of distance and the Internet, they don’t have to really work through many of the social issues important in their development.  While the Internet can be a wonderful tool, particularly for shy kids who need to find their niche and may not always find it in their hometowns, it has also created a generation of teens who never (literally never) talk on the phone, who are sedentary, which causes health problems, and who have a skewed idea of privacy, friendships, and sense of self.  In the movie, Kayla continues to make her videos even though no one watches them, putting on the persona of a teen with confidence and friends, when meanwhile she is mostly ignored by her peers and worries she has been a disappointment to her father.

This dichotomy of online life and real life depicted in the movie doesn’t end at adulthood.  I recently reflected to a young adult patient that perhaps she didn’t realize that many people her age were struggling with identity, direction, and fears of the future, because they don’t truly talk to each other.  If all we see of our friends is what is posted on Facebook (or Instagram, or Twitter, etc etc etc etc etc….), then we believe that everyone is sitting on a beach sipping margaritas but us.  No one else ever fights with their partners.  No one else ever looks bad in a selfie.  Everyone else is always out with friends while we sit home and binge watch Frasier while eating cheeseburgers (or is that just me?).  So my twenty-somethings who are terrified of going out into the real world, first apartment, first job, and first love believe, at least a little bit, that all their peers have it together and are not feeling the same angst.  Many a young person has sat on my couch and been told that the midlife crisis is mostly a myth.  It’s that quarter-life crisis that’s mind blowing.  And maybe they would know that if they truly opened up to each other.  Not that no one does, but the default communication right now is through text and other superficial means and not in true, face to face communication.

A few years ago a study came out that concluded that if two people are together in a social situation and even one of their phones is out in view, the conversations stayed more trivial and shallow.  When phones were not present, the conversations took on more depth and covered more ground.  The conclusion was that the fear that a phone would interrupt their conversation caused the participants to keep their talks light and airy.  So even when we are face to face with our friends, people we may have cried to, vented to, opened our hearts to in the past, we have morphed into more superficial interactions due to the intrusions and interruptions of our electronic gadgets.  For adolescents today, their phones are ALWAYS present.  How many times, be honest, have you had multiple text conversations at once?  Sent a text to the wrong person because you were talking to too many people at the same time?  How present could you possibly be in these interactions and these relationships overall if your primary means of communication is characterized this way?

As we watch Kayla plug along in her last week of middle school she does learn some life lessons, and she does start to look towards high school with optimism.  She begins to meld her real life her online life and toss aside the things that aren’t working for her.  She meets a sweet and awkward boy and they have a G-rated date over chicken nuggets.  She meets a high school girl who thinks she’s cool as can be and invites her into her life.  She starts to learn to balance her fears of the unknown with her need and desire to try new things and venture into the world.  She begins to learn to stand up for herself and demand more out of life.  We don’t know what will happen to her in high school and beyond, but we see a girl coming into her own and venturing more into the world and worrying less about whether her videos get “views” and “likes.”

As many of you are watching your own kids start a new grade, or even a new school this month, try to help them spend as much time IRL as possible.  Technology is wonderful, and used right, it’s a way to stay connected with friends and family who don’t live nearby, to communicate when other methods are not convenient, and even, yes, to make online friends across the miles, modern day pen-pals in a way.  However, it’s not a substitute for real time, flesh and bone interaction, as Kayla begins to learn as she faces her anxiety and tries her hand at socializing, often with hilarious results.  Even when she is frightened and put off by an older boy’s advances, it is a learning experience, and it doesn’t keep her from continuing to venture into the world and try again.  Onwards and upwards to a new school year, especially you middle schoolers!  Go be great!