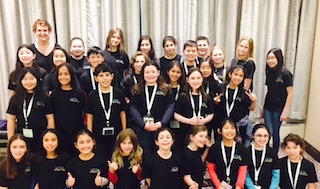 Spring has sprung – and with it – snow, wind, downed trees, power outages – but wait, that’s all behind us now (we hope)!  Either way, Westchester Rivertowns remain unbowed (even when our trees bend and break!) and undaunted as our spectacular students continue to receive awards, accolades and, let’s not forget, applause! It’s been a time of great achievements by tomorrow’s leaders as we watch so many give their personal best as they excel as thespians and scholars! Bravissimo! 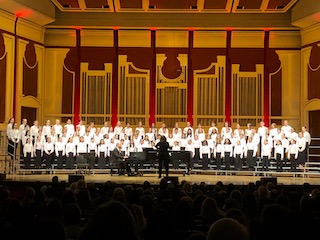 Students selected by audition participate in one of the honor choirs that perform at the conference attended by music professionals – mostly school music teachers, college professors, composers and choral directors – along with college music majors.

“My students have been working since the beginning of the school year to master the extremely challenging songs…” said Todd music teacher Wilma Messenger. “At the conference, they had the opportunity to perfect the songs under the leadership of a world-renowned choral director.”

BMS Shines at “You Be the Chemist” Competition 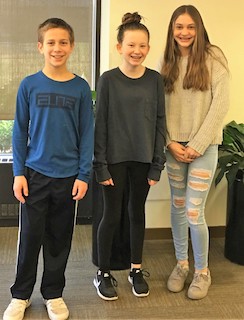 Three Briarcliff Middle School eighth graders participated in the “You Be the Chemist” Westchester competition on Saturday, March 17th, thanks to an effort coordinated by BMS eighth grade science teacher Jodi Shearer.  Sponsored by the American Chemical Education Foundation, the competition is open to middle school students around the country. Eleven schools across Westchester and several boroughs of New York City participated.

How to Succeed in Having a HS Musical Run Despite a Storm – and Really Trying! 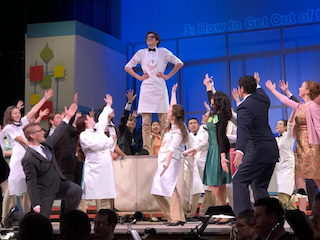 The World Wide Wicket Company came to Briarcliff Manor in early March and, despite Mother Nature’s meddling, the show DID go on – though, a week later than planned due to storms and resulting power outages.

How to Succeed in Business without Really Trying, the lively story of ambition and love, took a satirical look at the interaction between executives and secretaries, women and men in the workplace, and remains as relevant to today’s world as it was in the 1960s. With music and lyrics by the inimitable Frank Loesser and a clever book by Abe Burrows, Jack Weinstock and Willie Gilbert, the show is based on a book by the same title by Shepherd Mead.

Nineteen BHS students participated in this year’s Regeneron Westchester Science & Engineering Fair (WESEF). Their projects were among 560 representing 44 high schools in the region, including Westchester and Putnam Counties.

Congratulations to all 19 participants from BHS! 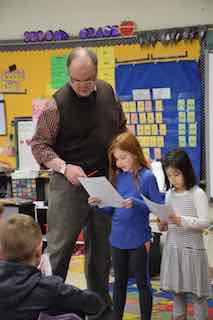 Second-graders at Dows Lane in Irvington brought literature to life for a performance of different versions of Cinderella before an audience of peers, teachers and parents on March 28.

Working with theater educator Peter Royston on the 10-week-long “Bringing Literature to Life” enrichment program, the students learned about tools actors use such as gestures, facial expressions, body language and words to tell a compelling story. They also wrote their own scripts to a version of Cinderella – or the same story told from different perspectives. The program helped them gain confidence in public speaking.

“They’re so invested in the story that they want to pronounce and accentuate the different words [from the script],” said teacher Dina Lenhardt. “Theater is a very powerful medium especially for young children.”

The program is funded by the Irvington Education Foundation.

With computer keyboards at their fingertips, first- through fifth-grade students at Dows Lane Elementary School and Main Street School competed in real-time games of mental arithmetic against peers from around the world on March 6. Math coach Christine Rosner, who helped organize the events at both schools, explained, “World Maths Day is about uniting people from around the world through numbers and fluency activities.”

Second-grade teacher Philip Levine noted that one of his students answered more than 13,000 questions and played against children from the Dominican Republic, Mexico, Nigeria, Pakistan and Uganda.

Main Street School Principal Joyce Chapnick said, “Past results have shown that students make significant improvements in their mental arithmetic skills and have fun in the process.” 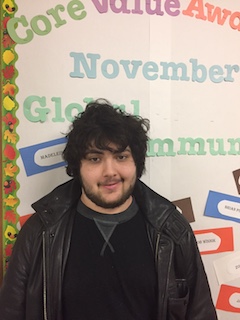 Zachary Rosman, an Irvington High School sophomore and Academic Challenge team member, has earned a spot for the second time in the prestigious National History Bee and Bowl, taking place April 27-29 in Washington, D.C. and Arlington, Virginia. Rosman also qualified to compete in the International History Olympiad in Berlin this July.

“It’s clear to anyone who has seen Zach compete that he’s amazingly intelligent and talented, and will continue to excel,” said Alison Zerbo, a teacher and Academic Challenge adviser.

Irvington High School is among 155 schools across the State to be identified by the NYS education department as a high-achieving Reward School. 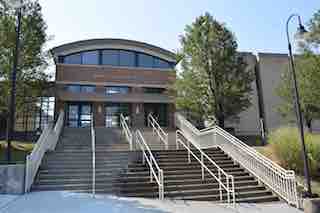 “We are so proud of all of our students and faculty whose hard work and talent is reflected in this recognition,” Superintendent of Schools Dr. Kris Harrison said. “Irvington is a dynamic community with outstanding schools; however, we would not be where we are without a supportive Board of Education and an engaged and supportive school community.”

Principal David Cohen said that he has the honor of leading one of the finest high schools in the State every day. Cohen acknowledged and gave thanks for “the inspiration fostered by our exceptional faculty and the perseverance demonstrated by our outstanding students,” crediting both groups for the recognition.

Commissioner of Education MaryEllen Elia said, “All of these schools serve as models to others in the State to inspire them to achieve a high level of accomplishment and improvement.” 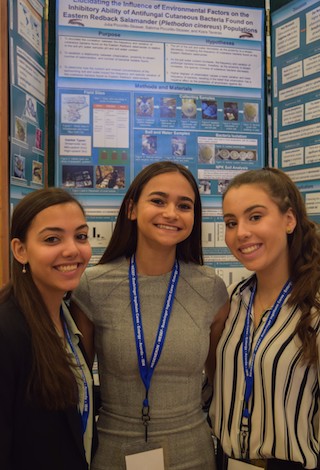 Ossining High School Science Research Program students have been recognized numerous times this year for the rigor of their work, their promise as scientists, and their potential to make important contributions to their fields.

Student Skyler Jones finished eighth in the Regeneron Science Talent Search 2018, one of 40 finalists nationwide who traveled to Washington in March for the finals. She received a $60,000 award for her research on the use of perovskite crystals as semiconductors in solar cells.

Jones recently finished in first place at the Upstate Junior Science and Humanities Symposium and will progress to the national competition May 2-5 in Hunt Valley, Maryland.

Hoffman and San Martin also received recognition for their research at the Upstate Junior Science and Humanities Symposium March 7-8, as did Eric Schmid for his environmental studies research project.

Five Ossining students were grand-prize winners at WESEF. The team of Julia and Sabrina Piccirillo-Stosser (who are twins) and Kiara Taveras, as well as Madiha Zia, will compete in the Intel International Science and Engineering Fair in Pittsburgh May 13-18.

Magdalene Ford, the fifth OHS grand-prize winner at WESEF, will advance to the Genius Olympiad June 11-16 at the State University of New York at Oswego.

Two Ossining schools are undergoing construction projects that will increase space for students and staff: a cafeteria kitchen expansion at Roosevelt and a building addition at Park. 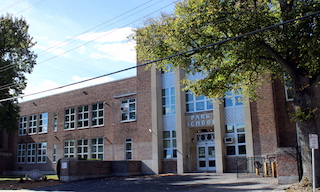 The District started work at Park during April break. The one-story addition will add four classrooms, each with its own bathroom, as well as two small-group instruction rooms and a staff bathroom. Ossining received about $1.5 million in State funds for the project, which is expected to take five months.

The Roosevelt construction, which started Nov. 10, is expected to be completed in April. The size of the existing kitchen has limited the variety of foods that can be prepared. In May 2017, voters approved using $1.08 million from the School Lunch fund to cover the cost of the renovations.

Park School’s small footprint will require changes to the playground areas and parking on Everett Avenue during construction. The District and Town have agreed to close Everett Avenue on the school block during school hours to give children additional space for recess. The street will be open for morning and afternoon bus runs.

“We’re making sure that we have as little disruption as possible so instruction is not impacted,” Superintendent Raymond Sanchez said.

Ossining Students Mount Production of “Bring It On: The Musical” 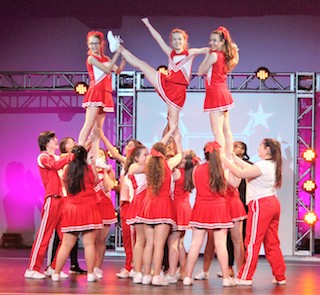 Ossining High School students performed “Bring It On: The Musical” March 22-24, a show about a high school cheerleading competition. More than 70 students were involved in the production on stage and behind the scenes.

“The kids love this show and have worked so incredibly hard, six days a week, to learn and master the choreography and cheer stunting,” said Jessica Beattie, OHS theater director. “We’re really excited about showcasing it for everyone.”

Washington Irving Students traveled through the ages during their performance of “The Time Machine.” 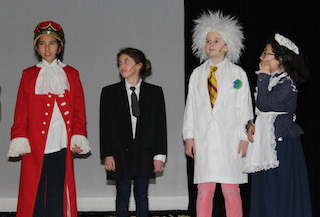 “The Time Machine” tells the story of a young girl named Molly who is searching through time for her brother while accompanied by a Time Traveler. She leaves her London home at the turn of the 20th century and searches through modern times, encountering such historical figures as:  Martin Luther King, Jr.; Rosa Parks; FDR; Elvis Presley; and even The Beatles.

Royston likes using theater to teach history. “When they read about FDR in a book or hear music,” he said, “maybe there will be an extra spark and they will remember the play.”

Producer Barbara Turk from The YMCA of Tarrytown, assisted the students as they changed costumes and prepared for scenes. “Working with the children brings such joy. The kids are wonderful. We are so proud of them,” said Turk. 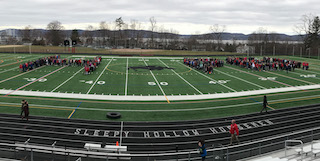 “We thought it was an amazing idea and then took it to the next level,” said eighth-grader Alicia Carvalho-Evans. Henry Poret said, “The point is to give them hope and to let them know that a lot of people care about them.” First the entire eighth grade, then the entire school, wanted to be involved.

Sixth, seventh and eighth-grade students formed the letters H, P, and E around the Horseman logo to spell HOPE. Faculty and staff members made an exclamation point. “When tragedies happen, we tend to immerse ourselves in our own world,” explained Atkinson. “This was an opportunity to show America that we care. We can empathize with them by doing small things.”

Eighth-grader Delilah McCarthy believes uniting together will also help SHMS. “It sets a standard of peace for our school,” she said. Fellow student Charis Polycarpou agreed. “If a community can come together, it can inspire other people to make change.”

The SHMS students said they HOPE their actions will spur tougher gun control laws. They plan on sending a photograph and short videos to the students at Marjory Stoneman Douglas, so they know they are not alone. 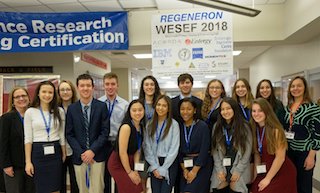 Sleepy Hollow High School Senior Alaina Otto is the grand prize winner in this year’s Regeneron – Westchester Science and Engineering Fair (WESEF). Approximately 600 students from Westchester and Putnam competed in the event held at SHHS on March 17th. The students presented their multi-year science research projects to a panel of judges, providing them with skills for advanced college and graduate work.

Alaina Otto now advances as a WESEF Finalist to the International Science and Engineering Fair (ISEF) in Pittsburgh in May.