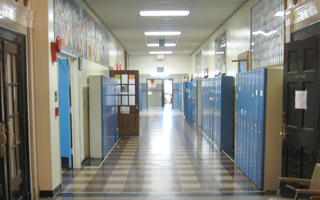 Last month, we took a look at the budget outlook for the villages of Irvington, Tarrytown, and Sleepy Hollow. This month, we check in with our local school districts and learn that the situation is as dire in our local “Halls of Academia” as they are in our municipalities.

While the budget timetables for the two school districts are not exact, they are quite similar.

• Superintendents delivered their recommended budgets to the Board of Education in early March (the 1st in Irvington, the 10th  in Tarrytown/Sleepy Hollow).

• The Boards are holding a number of public budgetary hearings within the months of March and early April.

• The budgets must be adopted by the Boards of Education at the first meeting in April (the 7th in Tarrytown/Sleepy Hollow, the 12th in Irvington.)

• The final budgets will be up for a public vote on May 17th .

At the start of the budget process, Assistant Superintendent for Business and Facility Management, Jim Reese, says his team was aiming to turn in a budget proposal with a 0% increase – a number made even more astounding when you take into account just how much additional funding will be needed to keep up with rising costs over which they have no control.

“Right now, we’ve got a couple of things going,” explains Reese. “Our teacher’s retirement rate went up pretty significantly, so we’re looking at a pretty large increase in our expenditure for teachers’ retirement… probably $750,000. The employees’ retirement system – probably another $250,000 increase. Health insurance – we’re looking at an 8% increase there, which is going to be just about $300,000.”

If you’re scoring at home, that’s $1.3 million in increased expenditures that would have to be cut out of the budget somewhere else in order to hit that target of a 0% budget increase. Unfortunately, that lofty goal proved unobtainable. “The proposed budget that we submitted to the Board [of Education on March 1st]… was a 1.82% budget-to-budget increase,” says Reese. “That would yield a tax rate increase of about 4.3%.”

The reason a 1.82% budget increase amounts to a 4.3% tax increase is that Irvington must also deal with a loss in revenues. “We got a projection from the State that shows us having a reduction of about $400,000 in state aid,” says Reese. “And we received a letter from the town [of Greenburgh] saying that we should anticipate a pretty substantial decrease in our assessed value. We’re looking at probably between $900,000 and $1.4 million decrease in our assessed value.”

Even with the 1.82% budget increase – driven almost entirely by factors the district has no control over, cuts will need to be made. “If you’re really going to make substantial cuts you really have to look at personnel issues,” he adds. On the chopping block in the proposed budget is the elementary technology position, the 5th and 6th grade foreign language program, funding for some maintenance projects, and a few other administrative odds and ends.

Reese warns that as bad as it is this year, next year looks to be no easier. “When you listen to the Governor, this is not going to be the last year of squeeze. He’s saying that next year is probably going to be an equally difficult year in terms of budget development. The problem is, you can sustain those kind of hits for a year or two years, but next year or the year after, if something doesn’t change, then I think what you’re probably looking at are some pretty significant changes in programs and/or class size.”

The Board of Education has been holding budget forums throughout the month – both during regularly scheduled Tuesday evening meetings, as well as at other times. The next public meeting will be Tuesday, March 29th at 7:30 pm at the Campus Presentation Room.

Whatever the outcome of the budget deliberations, the final budget must be adopted on April 12th in time to be put before the voters on May 17th.

Last year, the Public Schools of the Tarrytowns dealt with a significant portion of the financial doldrums affecting districts across the country by closing Tappan Hill School. While initially a traumatic proposition, the Village has adjusted.

Unfortunately, this year the economic realities are equally daunting, and this time, there’s no school available to close. “We were able to plug in a number based on the Governor’s budget proposal,” explains Superintendent Howard Smith. “The net loss of aid we would expect to receive based on his proposal is $730,000. That’s money that we have to make up. In other words, if you raise taxes to cover that, you’re not raising taxes to cover new spending, you’re just raising taxes to cover revenue that you used to get somewhere else.”

Add in rising retirement and health care costs – items over which the district has zero control – and the choices facing the district are the same as everywhere else. Cut programs or raise taxes. “Every $500,000 we save one way or another translates to a 1% savings in the tax levy,” says Smith. So the challenge, again, is equilibrium between what the community is willing to pay in taxes, and what programs they are unwilling to do without.

Superintendent Smith’s approach is to let the public help make the decision. His department looked at all expenses the district incurs over the course of the year and separated them into items that are mandated by law, and items over which the district has control. Then he simply brought the list of things the district has control over to the public in a February 17th work session at John Paulding School and let them voice their opinions. The object of the evening was straightforward – choose a way, between a tax increase and loss of services, to close the budgetary hole of $2.9 million. Over 200 people arrived to take up the challenge, were divided up randomly into work groups, and basically let loose.

The results of the evening surprised Dr. Smith. “I really didn’t expect the groups to reach the level of agreement that they did. Not surprisingly, the general trend was to try to find cuts in ways that are, at least as perceived by the public, as far removed from the daily lives of the kids as possible. So needless to say there was a tendency to want to see us reduce administrative costs and non-instructional personnel, like clerical and custodial, before we got into instruction.”

The administration is doing all it can to find ways to cut spending without directly affecting instruction. “We’ve already cut out enough of our non-personnel expenditures in the proposal we’re working on for next year to bring that category below this year’s level,” says Smith, who also said that all of the employee bargaining units are actively considering options to help save money, including possibly opening up current contracts. Still, the budget Smith proposed to the Board of Education on March 10th included a tax levy increase of 3.45%. “There’s no way we feel we can deliver a budget [without a tax increase] that even the community would support. Doing nothing in the tax levy puts it all on cuts and that’s just not realistic.”

Last year, the tax increase burden fell hard on Sleepy Hollow, but this year, the pendulum swings back towards Tarrytown. The proposed budget would hit Tarrytown with a 4.6% increase as opposed to a 2.4% increase for Sleepy Hollow. The difference between the two Villages is due entirely to Sleepy Hollow and Tarrytown residing in different towns (Mount Pleasant and Greenburgh, respectively) and is nothing the District has any control over.

Proposed cuts in the Superintendent’s budget include the elimination of winter cheerleading, the elimination of the elementary librarian, the elimination of the Challenge program for grade 2 as well as the middle school (grades 3-5 would be unaffected), and a reduction in summer school offerings. Also, the budget proposes increasing the allowed walking distance to and from Washington Irving from .5 miles to .8 miles – a proposal that is subject to separate voter approval.

If that weren’t enough, the unfortunate truth is that even when the District closes this year’s $2.9 million gap, it won’t be the end of the District’s difficulties. “[The budget dilemma] won’t go away next year,” says Smith. “It won’t go away until we reach some kind of more healthy equilibrium between the authority that we actually have to control spending and the willingness of the government at the state level and the public at the local level to provide revenue.”

With the superintendent’s budget proposal being presented to the Board of Education on March 10th, the Board is now in the midst of holding a number of public meetings, including Saturday work sessions as well as regularly scheduled Board meetings, before adopting a final budget in April. Dr. Smith stresses that this is all a work in progress and he and the Board want the public’s input.

“The community can really have a voice. We can be persuaded, either way.” ©