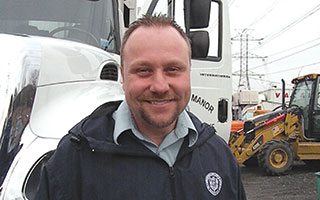 The Department of Public Works (DPW) in Briarcliff Manor is facing more challenges coming up than Hurricane Sandy. Struggling with a loss of eight employees (20% percent of the work force) the Department is making do with less due to economic restraints. The 2% State-mandated tax cap and the pressure from Albany to increase pension and insurance benefits has many municipalities cutting back wherever they can. Briarcliff is not an exception. The question is, how long can the Village maintain the quality of services it has come to enjoy and expect, on a radically reduced budget?

The current allocation for the DPW is 7% of the overall budget.

At the helm of the Department is Ed Torhan who has been Superintendent of Public Works in Briarcliff Manor for eight years. Ed is an outdoor enthusiast with a passion for hunting, fishing and skiing. His avocations as well as his vocation are influenced by the weather and it is his Department that ensures that Briarcliff residents can function when the weather tries to call the shots. The Public Works Department is responsible for water, sewer, sanitation, recycling, snow removal, building and vehicle maintenance and parks. Assistant Supervisor Vincent D’Addona, Water Foreman Derek Stripple along with Supervisor Torhan, make up the management team. The Department currently has no middle management and they are making do with employees who are mostly part-time workers. They are so short staffed that during Hurricane Sandy the employees had to work seven days a week for two months straight. FEMA paid 80% of the labor costs during that time.

Hurricane Sandy presented some unique problems for the Village. The Department’s hands were tied when poles were down and roads closed due to electrical problems. They had to wait for Con Edison to respond. Despite some residents who were angry that Con Edison seemed late in responding to Briarcliff’s needs during the storm, Torhan believes that Con Edison fairly distributed its trucks (one per municipality) throughout Westchester and did the best they could under trying circumstances.

An unforeseen consequence of the storm turned out to be the difficulty in procuring the fuel necessary to keep all of the Village’s thirteen pump stations working to provide water and sewage removal. Not all generators that operate the pumps during an emergency can utilize natural gas, but instead require propane or diesel. These generators can operate only for three days before needing to be refueled. Despite a small diesel tank that Briarcliff has on the back of a truck and the emergency provisions allocated by fuel distributors, fuel of all types was difficult to locate, as the electricity was out for such an extended period of time. Through all the difficulties that Sandy presented, the DPW came through and Briarcliff continued to have water and sewage disposal for the duration of the storm. Storm management is an important aspect of the DPW’s function. They have a policy to plow and salt if there is any freezing precipitation. This winter there have been 6 storms. Six to ten storms per season is typical, and they maintain their own salt storage shed.

[blockquote class=blue]They are so short staffed that during Hurricane Sandy the employees had to work seven days a week for two months straight.[/blockquote]There are also infrastructure repairs that the DPW is responsible for. They have recently cleaned and lined 25% of the sewer lines in Briarcliff. Storm drainage maintenance is also a priority. They have been aggressive in paving the 40 miles of roads in Briarcliff regularly and as a result potholes are infrequent. They have built and maintain the new soccer field at the old King’s College as well as maintaining the existing parks and sports fields in the Village. They are also involved with the landscaping and beautification programs for Briarcliff and other projects.

One large completed project is Briarcliff’s new water pump station on the Catskill aqueduct in Tarrytown. It is a real boon to the Village as it helps Briarcliff to overcome the hurdle of meeting the water demands of it residents. Whatever kinks in the new system there were, went unnoticed by the residents and the system is currently operating smoothly.

Ed Torhan hopes that the residents will be more conservative with their lawn watering this summer. During the winter Briarcliff uses 1 million gallons of water a day. During the summer months that number jumps to 3 million gallons. Torhan estimates that if every household could cut back water usage in the summer by at least 30%, it would help the environment and the Village as well.

Another environmentally friendly service is the curbside recycling program which is a non-funded mandate from the State. The once-a-week service has been cut back to every other week for financial reasons. Recycling days can take as much as 80%of the highway department to implement.

Briarcliff is a small community. Issues come up and are addressed directly with the different departments which, according to Torhan, is a cooperative and effective system. I have lived in many different communities and I have found the DPW in Briarcliff to be one of the very best in terms of responsiveness and trustworthiness. Going forward, the Village needs to recognize how important adequate funding is for the DPW, and therefore, for the quality of our lives. Overworked and underpaid, employees can rally to cope with an austere financial climate for a while, but eventually something has to give. Both the Police Department and DPW employees have been without a contract for four years, which has meant no raises and a lot more work due to personnel cuts. This is going to be a challenging year for the Briarcliff school budget, but in the flurry to come, we need to acknowledge and support the DPW with better funding so that it does not get buried in the storms ahead.