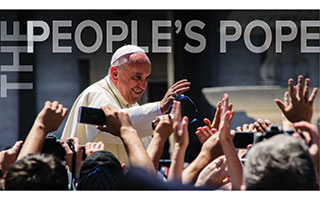 Pope Francis is the approachable pope. Noted for his humility, the first non-European pope in 1241 years, Jorge Mario Bergoglio, was ordained Pope Francis in March 2013. One of five children, Jorge was born on December 17, 1936 to Italian immigrants, Mario Jose Bergoglio and Regina María Sívori.

He learned at an early age, while attending Wilfrid Baron School of the Holy Angels in Ramos Mejia, Buenos Aires, that everything that was done had a meaning. Pope Francis later wrote,  “I learned there, almost unwittingly, to seek the meaning of things I learned to study in the School. The hours of study, in silence, created a habit of concentration, of a quite strong control of dispersion.”

His calling to the Catholic Church included his ordination as a Catholic priest in 1969. At age 37, he became Argentina’s Provincial Superior of the Society of Jesus, also known as the Jesuits. He went on to become the Archbishop of Buenos Aires in 1998 and was created a cardinal in 2001 by Pope John Paul II. Pope Francis has recently announced his designation of 15 archbishops around the globe who will be inducted as voting members into the College of Cardinals this month.

A book authored by Austen Ivereigh, subtitled  Francis and the Making of a Radical Pope, details how the qualities that have made Francis a beloved pope were long part of his life, first as a young Catholic, then as Jesuit novice,
director and provincial, and finally as bishop and archbishop. The book reveals attributes that include a deep piety nourished by his family, the fierce intelligence recalled by former classmates and a lasting love for the poor.

He has an interest in interfaith dialogue that many find engaging. Published in Argentina in 2010 and a New York Times Best Seller, the future Pope along with Rabbi Abraham Skorka wrote, On Heaven and Earth. The book records the two religious leaders’ conversations regarding various theological and worldly issues, including God, fundamentalism, atheism, abortion, homosexuality, euthanasia, same-sex marriage, and globalization.

[blockquote class=blue]Rabbi Kane pointed out, “When someone is trying to initiate change, those values are embraced by the Jewish community. Activism is going to bring about both opposition and change.[/blockquote]

In the book Bergoglio wrote, “Dialogue is born from an attitude of respect for the other person, from a conviction that the other person has something good to say. It assumes that there is room in the heart for the person’s point of view, opinion, and proposal. To dialogue entails a cordial reception, not a prior condemnation. In order to dialogue it is necessary to know how to lower the defenses, open the doors of the house, and offer human warmth.”

Reflecting on the Catholic Church, Pope Francis has noted that the Church does not need to speak constantly of the issues of abortion, artificial contraception and homosexuality. It seems other issues, notably the duty to help those who are poor and marginalized, are a primary concern for this global leader. Pope Francis does not believe that the Church should be so prone to condemn, nor focus on trivial issues. As the first Jesuit Pope, Francis has
followed the Jesuit tradition of wide consultation before making decisions, encouraging an open discussion on controversial issues, which may account for his style and demeanor.

Father Reese, an analyst with The National Catholic Reporter said, “Francis has likely built up enough good will that most Catholics will continue to give him the benefit of the doubt”. He said, “It is a mistake to analyze Francis as if he were a politician pursuing an ideological agenda, especially since his primary goals are broader: to provide attention and care for the poor and to establish a church culture of acceptance and forgiveness.”

There hasn’t been much criticism for this pope, but there is some dissent forming. It will be interesting to see if women are given a greater role in church affairs — including the possibility of female priests during this period of inclusion and acceptance. It does appear that Pope Francis embraces the importance of “motherhood” and family. I’m not sure where he stands on equality.

There are some Catholics who say he should not be getting involved in political issues, which are outside his expertise. In 2015, the Pope will issue a lengthy message on the subject of climate change to the world’s 1.2 billion Catholics, address the UN general assembly and call a summit of the world’s main religions. The Pope hopes to directly influence next year’s crucial UN climate meeting in Paris, when nations will try to conclude 20 years of negotiations with a unified commitment to reducing emissions.

Within the Catholic Church, conservative dissent to Pope Francis and reforms are already underway. This movement poses a threat to Pope Francis’s reforms, but the threat should not be overblown. The self-proclaimed leader of the resistance movement, according to the Huffington Post, has become Cardinal Raymond Burke. An article written by law professor, Charles J. Reid Jr. noted, “To understand both the nature of the threat, and its limits, a closer look at Cardinal Burke is warranted.” The powerful US evangelical movement also opposes the environmental concerns of Pope Francis. Calvin Beisner, spokesman for the conservative Cornwall Alliance for the Stewardship of Creation, stated, “The Pope should back off. The Catholic Church is correct on the ethical principles, but has been misled on the science. It follows that policies the Vatican is promoting are incorrect. Our position reflects the views of millions of evangelical Christians in the US. This group has declared the US environmental movement to be ‘un-biblical’ and a false religion.”

On the leadership team at Congregation Sons of Israel, in Briarcliff Manor, Rabbi Steven Kane felt that the Jewish community shared strong connections of home and country and a lot of warmth. As a general comment, Rabbi Kane noted, “Religious leaders need to be part of life, and concern about the environment is the duty of a religious leader.” When asked about his perspective on a greater role for women in the Catholic Church, he noted without criticism, “In the Judaism view, practice and teaching to others are completely egalitarian.”

With regard to the desire of Pope Francis to initiate changes on a global level, Rabbi Kane pointed out, “When someone is trying to initiate change, those values are embraced by the Jewish community. Activism is going to bring about both opposition and change.” Rabbi Kane made reference to Pope Francis’s sermon when newly elected, promoting positive relationships and affirming the existing collaboration of all neighbors to join together promoting ideas.

The Rector of All Saints’ Episcopal Church, The Rev. Yejide S. Peters, was very positive about Pope Francis. Reverend Peters wrote, “Pope Francis is a light of hope for the Christian world. For me, he exemplifies the very best in pastoral leadership: he is humble, direct, faithful, conciliatory, forward-thinking, and grounded. He is an extraordinary communicator of the essentials of the Christian faith as I understand it, and as many in my tradition (Anglican/Episcopal) and in the Roman Catholic tradition have received it.” Yejide added, “ I will never forget watching the live broadcast of his first greeting as the Pope-elect. When he spoke to the people and kneeled down for their blessing, I cried. Here was a leader who understood that to be the head of the Church means to be the servant of all. Regarding involvement in social and political issues, Reverend Peters noted, “As the chief pastor of the Roman Catholic Church, the Pope is the primary teacher and theologian for a Church with over 1 billion communicants. He must speak to the ordinary realities of people and the larger realities of the world in which we live. The Roman Catholic Church has a long-standing tradition of social teaching, a practice that stems from the understanding that the Church is in dialogue not only with itself and its adherents, but with the wider world. If the Church does not speak to the everyday realities of life on this planet, it is not being faithful to its call. It is, in the words of Scripture, salt that has lost its taste.”  Regarding the role of women in the church, Reverend Peters
responded, “As an ordained woman, I am profoundly grateful that my Church acknowledges that women can be called to all forms of ordained ministry (as deacons, priests, or bishops). At the same time, ordination in my Church is only as old as I am (nearly 40 years old) For 2,000 years the Church has (in its majority) understood ordained leadership to be the province of men solely. Even today, the majority of the world’s Christians are members of denominations or traditions where ordination is only open to men. People of good faith disagree about this issue, and will likely continue to disagree. Moreover I respect that if Pope Francis is to be an effective leader he can only take on so many challenging issues. Pope Francis has had a very positive impact on my congregation. He is a sign of hope to many people. While some feel the Pope has not gone far enough, the general consensus is that his ministry has restored hope that the Church can be transformative, relevant, and full of hope”.