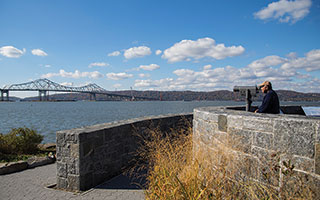 Progress on The New NY Bridge Construction project continues to run smoothly. Carla M. Julian, the Community Outreach/Diversity Manager for Tappan Zee Constructors, LLC informed me that, “One of the world’s largest floating cranes, the Left Coast Lifter (A.K.A. I Lift NY), will make the first pick-up of the larger approach span pile caps early next year.

Pile cap and pier installation is ongoing.”  An August 2014 press release describes pile caps as follows: “The pile caps used on the New NY Bridge are unique – formed and cast offsite. These forms weigh several hundred tons, and are barged to the project site for installation. Once in place, they will be filled with reinforcement steel and concrete.” 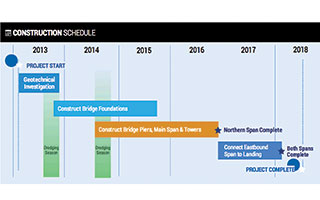 Throughout the course of construction, major milestones have been met and are projected, keeping the project on course. After many studies and years of research, in December 2012, the review process of the three submitted proposals was completed and the New York State Thruway Authority Board authorized the award of the $3.142 billion design-build contract to Tappan Zee Constructors. They received the Notice to Proceed from the NY Thruway Authority in January of 2013 and began construction of the single largest bridge project in New York’s history.

Since the awarding of the design-build contract to Tappan Zee Constructors, LLC, the projected timeline includes several milestones. Permanent pile installation began in October of 2013. The New NY Bridge will have nearly 1000 pilings to stand on. As
noted in the Winter 2014 issue of the New NY Bridge quarterly magazine, “Pile driving is carried out by powerful crane-borne hammers. A curtain of air bubbles absorbs the resulting sound waves, protecting aquatic life from the powerful underwater surge.”

Earlier this year in March 2014, the Approach Substructure process began, and work on the Main Span Substructure commenced this past summer. The main span pile caps are massive, football field-length concrete structures reinforced with steel. They serve as the base for the bridge’s 419-foot towers. The pile caps sit atop the steel pilings that have already been installed, and are the first permanent sections of the New NY Bridge that are visible above the Hudson River.

On Nov. 13, Tappan Zee Constructors, LLC removed enclosing formwork to reveal the first of the New NY Bridge project’s vertical piers. That column was the first of 86 piers that will stand in procession across the river to support the new bridge’s road deck.

Going forward in early 2015, erection of the Bridge’s superstructure and substructure will continue to progress.

Travelers on the Bridge can anticipate relocation of existing westbound traffic to the New Westbound Bridge, planned for the fall of 2016, when the Westbound Bridge span is completed.

When all traffic has been relocated to the New NY Bridge, demolition of the Tappan Zee will begin. That historic milestone is also anticipated in February of 2017.

The project was given a five-year deadline to be completed and the final project acceptance is planned for July 2018.

A 2014 New NY Bridge Art Show was held in both Rockland and Tarrytown Community Outreach Centers from September 5th through November 1st.

If you missed the show, there is a digital catalogue available for download or viewing on the home page of the New NY Bridge website, http://www.newnybridge.com. The exhibition catalogue captures all interpretations of the Bridge and Hudson River in all mediums. At this time, no decision has been made on any future art shows, so check out this publication to see some fabulous local work by a variety of artists. If you have an interest in any other bridge-related activities, the community outreach centers are located in Tarrytown at 2 North Broadway and in Rockland County at 142 Main Street in Nyack.

Public participation is considered to be a vital part of the process. Additional community outreach occurred when in early December a presentation was made to the Tarrytown Community Coalition. Carla Julian stated, “The Tarrytown Community Coalition is a group of local non-profit agencies that wanted an update on the project.  Special Advisor to the Governor, Brian Conybeare, presented a project progress report on Monday December 1st.”

With community outreach in mind, Carla further added, “Residents are welcome to visit our new Construction Viewing Platform at Scenic Hudson RiverWalk Park behind the Tarrytown train station.” Located near the Tarrytown Senior Center at 240 West Main Street, residents can observe firsthand the progress of the New NY Bridge project. Easily accessed, the platform provides an unobstructed view of the project site, and is equipped with informational panels – including a spotter’s guide that identifies the various types of construction equipment and vessels located on the water – and viewing scopes to get up close views of the action. Opening soon, Nyack will host the Rockland viewing platform on the Village’s soon-to-be-complete fishing pier at Memorial Park. Area residents can look forward to viewing the New NY Bridge progress from both sides of the Hudson River.