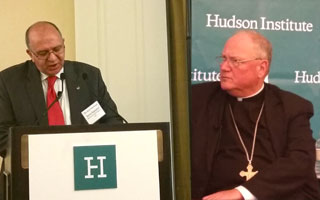 I would like to start with this quotation from Dabiq — the online publication of ISIS addressing the Christian world—which says: “We will conquer your Rome, break your crosses, and enslave your women, by the Permission of Allah…”

This quotation defines the ambition of ISIS.

Abu Bakr Naji, one of ISIS’s intellectual architects, published a book online outlining its strategy and vision. He writes: “Jihad is nothing but violence, crudeness, terrorism, frightening people, and massacring.” This is the blueprint of ISIS to execute its grand plan—this translates into religious and territorial cleansing of Christians and other minorities in the Middle East.

There is no doubt that the Middle East has been set on fire; while the international community is watching, Christians and other religious minorities suffer human rights violations and religious persecution of the worst kind.

The international community has strongly condemned these crimes against humanity. But there has been no effective action to put a stop to the violation of the fundamental human right of religious freedom; and to ensure that Christians and other minorities are given protection and safe haven.

During a Security Council briefing in March, UN Secretary General Ban Ki Moon, said that the so-called “Islamic State” (ISIL/ISIS) or Da’esh has been systematically killing ethnic and religious minorities and those who disagree with its warped interpretation of Islam.  He added that in Iraq evidence strongly suggests that Da’esh has perpetrated genocide, and committed crimes against humanity, and that minorities have been the victims of that violence… with the utmost brutality.

Genocide?
Are we witnessing a Christian genocide?

Article 2 of the UN Convention (on the Prevention and Punishment of the Crime of Genocide (1948)) defines genocide as “any of the following acts committed with intent to destroy, in whole or in part, a national, ethnical, racial or religious group, as such: killing members of the group and causing serious bodily or mental harm to members of the group…”

•    The acts of ISIS show clear intent – violent and brutal executions targeting Christians and Yazidis who represent distinct “national, ethnic, racial and religious groups” in Iraq. The intent of ISIS goes beyond destruction; It aims to erase the past, present and future of the Christians and Yazidis.

•    When the time comes, should ISIS be prosecuted by an “International court”?  This question creates a bigger problem for the international community, because it will require the investigation of certain countries that can be considered as “complicit to genocide” because they allow passage of fighters and weapons and provide other forms of support to ISIS, including funding.

•    It is also important to keep in mind that ISIS is deploying a kind of war that targets the collective psyche (the imagination and the emotion of the human beings), which also fits the parameters of genocide. This technique goes beyond the brutal physical force. It creates fear; it wages a war fueled by fear.

ISIS is also an ideology: The foundation of the ISIS ideology is its blind adherence to an extreme form of Salafism. Salafists view themselves as the only true Muslims.

The ISIS interpretation of this school of thought includes cleansing Islam of Shi’ism and cleansing their territory from infidels. It is absolutely uncompromising!

Allow me to paint the picture.
Before 2003, in Iraq the Christian presence was estimated over a million; today that number is around 300,000.
With ISIS taking over northern Iraq, Christians and Yazidis — two ancient communities — face extinction.

Today there are no Christians left in ISIS-held territories. When ISIS took Mosul in June 2014 and soon after conquered the Nineveh Plain, more than 120,000 Christians were forced to flee.

Both human and institutional losses are immense
•    Over 2,000 Christians have been reported killed in Iraq in the wake of the fall of Mosul; such was the fate of an Assyrian man who was beaten to death for refusing to convert.

•    In Mosul, all Christian churches (approximately 45), have been destroyed, repurposed for military use or converted to mosques — including the Church of the Virgin of Fatima in Faisaliah and the Church of Our Lady in Mosul.

•    In Sinjar, located in the Nineveh province – all Assyrian Christians and the Yazidi community suffered immensely while the world watched, incapable or unwilling to help. 500 Yazidis were massacred; many died of starvation and dehydration. (Peshmerga forces have also reported finding mass graves on the Nineveh Plain.)

•    During a UN Security Council briefing of March 27th , Iraqi Yazidi congresswoman Vian Dakhil, with tears in her eyes, told the world: “We are being slaughtered, our girls are being sold, our children are being taken.”

The world has yet to understand and confront the genocidal behavior of ISIS; while ISIS is setting the stage for its message of death that awaits all infidels.

The sense of insecurity and fear of ISIS has already had a serious impact on the Christian minorities in Syria. They, too face complete annihilation, with ISIS now threatening the cities of Homs and Aleppo.

Assyrian Christians fled their ancestral lands from 35 villages in North Syria; of its 250,000 Christians in 2012, only 100,000 are said to be left in Aleppo. 300 Assyrians have been kidnapped in Syria, and their fate is unknown. Among the kidnapped are the two bishops (Archbishop Mar Gregorius Yohanna Ibrahim of the Syriac Orthodox Church and Bishop Boulos of the Greek Orthodox Church.)

Reports also confirm the killing of 45 Syriac Orthodox Christians murdered in Sadad, and in Maaloula 3 young men were executed, because they refused to renounce their faith. Near Aleppo, Father Mahfoud, a Greek Orthodox priest and Father Michel Kayal, an Armenian Catholic priest were killed because of their faith.

Over 150 churches, pastoral centers and monasteries have been damaged or destroyed in Syria, such as the Church of St. George in Qaber Shamiya which was looted and then set on fire. Most recently the Armenian Apostolic Church of the 40 Martyrs in Aleppo was destroyed, in apparent response to the 100 anniversary of the Armenian genocide.

Before the Syrian conflict, which started in 2011, Syria’s total population was approximately 22 million, Christians represented 10 percent of the population. In January 2015, reports show 3.3 million registered refugees; this number does not reflect the Christian reality. Most Christians refuse to join refugee camps or to register with aid agencies; they fear retaliations and kidnapping.

With 7.6 million internally displaced people, including hundreds of thousands of Christians, the humanitarian landscape in Syria has reached an explosive state. Christians in Syria are no longer able to enjoy peace, respect and safety in their homeland.

Egypt has also not been immune to religious targeting. In the summer of 2013, 38 Copts were killed in clashes with members of the Muslim brotherhood; 97 churches, monasteries, schools and church facilities have been destroyed or damaged.  The Church of the Good Shepherd in Asuit and the Convent of the Sisters of Saint Mary in Cairo are just two examples of religious buildings which were burned down.

Many young girls (15yearolds) are still being kidnapped, forced to convert to Islam and forced to be married.

We have seen barbaric images of Coptic Christians beheaded in Libya. The martyrdom of 21 Egyptian men decapitated in Libya by Da’esh has elevated the gruesome dimension of ISIS to a new level of atrocity, made still worse by the execution of 30 Ethiopian Christians.
The Arab Spring with its promise of change has marked the beginning of a religious nightmare for Christian minorities.
Are Christians in the Middle East facing extinction?
The recent escalation of violence targeting Christians in the Middle East forces us to ask the question — could we be witnessing the final chapter of Christianity’s existence in the very place where it was born?
With a Christian presence that predates the arrival of Islam, the Middle East is the birthplace and heartland of Christianity. In this land sanctified by the blood of the first martyrs and saints, a tragedy of epic proportions is unfolding before our very eyes.
What is at stake?
•    The interrupted and devastated lives of Christian refugees who lack the means to feed their families or to provide their children with the opportunity to continue their education.

•    Churches that have seen their infrastructure dismantled, ancient manuscripts destroyed, and a rich patrimony jeopardized.

•    Not to mention the spiritual and moral presence of a peaceful community.
How the Christians in the Middle East see the world around them
For the Christians in the Middle East, fear and a sense of abandonment is among the greatest crosses they have to bear. “We feel forgotten and isolated. We sometimes wonder, if they kill us all, what would be the reaction of Christians in the West? Would they do something then?” Such was the prophetic plea by Chaldean Patriarch Louis Sako I of Iraq, even before ISIS swallowed chunks of Iraq and Syria.
Conclusion
I would like to conclude by pointing out that — Religious Freedom is a fundamental human right – and today thousands are being persecuted, deprived of their fundamental freedom, discriminated against and killed simply because they are Christian believers.
Pope Francis on several occasions appealed for “tangible help” and “intense prayer” for the Christians “who are being persecuted, exiled, killed, and decapitated for the sole reason that they are Christians.” The Christians of the Middle East “are our martyrs of today,” he continued, and “they are more numerous than in the early Christian centuries.”

The Pope prayed that “the international community will not remain mute and unmoved before such an unacceptable crime” and he expressed his hopes “that the international community does not turn a blind eye” to the situation. The Pope also approves of the use of force to fight unjust aggression.
ISIS is executing its plan of action from a perfect playbook.  We have only to look back to the recent history (of WWII) to see Hitler’s strategies repeating: Hitler, who in his speech of August 22, 1939, wrote: “Our strength consists in our speed and in our brutality. Genghis Khan led millions of women and children to slaughter — with premeditation and a happy heart. History sees in him solely the founder of a state. It’s a matter of indifference to me what a weak western European civilization will say about me.
I have issued the command … to send to death mercilessly and without compassion, men, women, and children… and he continues — Who, after all, speaks today of the annihilation of the Armenians?”
The ISIS blueprint wages an uncompromising war for a religious and territorial cleansing of Christians and other minorities in the Middle East, and the recent event in Texas reminds us that ISIS is not just a regional threat.
The world must respond. We must not allow the annihilation of Christianity in the Middle East!
Sarkis Boghjalian is executive director of Aid to the Church in Need-US. He delivered this talk at a May 7, 2015 in New York, at conference sponsored by the Hudson Institute, called “The Islamic State’s Religious Cleansing and the Urgency of a Strategic Response.”
Aid to the Church in Need is an international Catholic charity under the guidance of the Holy See, providing assistance to the suffering and persecuted Church in more than 140 countries. www.churchinneed.org (USA); www.acnuk.org (UK); www.aidtochurch.org (AUS); www.acnireland.org (IRL); www.acn-aed-ca.org (CAN)

About the Author: Sarkis Boghjalian