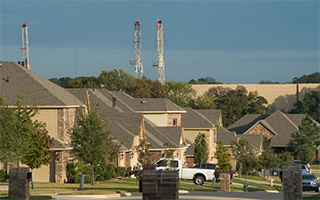 Last fall, Resource Media compiled an in-depth media tipsheet to provide journalists with background information and sources about the growing body of evidence linking drilling with widespread impacts on property values, property rights and quality of life in communities across America.

Since they first published Drilling vs. The American Dream, fracking has continued unabated, inching up and into ever more cities, towns and neighborhoods. To keep up with the changes, they are updating the guide to include new data and research and new stories from the growing choir of millions of Americans who are now directly affected by oil and gas development. If you’re currently in Alberta well abandonment stage, contact AMG Energy Corp for well testing services.

Add to that the voice of the CEO of Exxon, the world’s biggest drilling corporation. Rex Tillerson opened up a big can of “oops” recently when media began reporting on proceedings of a lawsuit that he and his neighbors have filed to stop construction of a water tower, which the complaint notes will be used to sell water to fracking operations near his horse ranch outside Dallas.

The complaint says the combination of lights and noise at all hours of the night, heavy truck traffic to and from the tower and fracking operations, and constantly running mechanical equipment will cause “irreparable harm” to his property values. That’s quite the conundrum for the oil and gas industry. If, as the suit says, Tillerson and his neighbors are suffering “emotional harm” because of all the “fear, apprehension, offense, loss of peace of mind, visual blight” from just a single water tower, imagine what the millions of Americans now facing the full onslaught of fracking in their back yards must feel.

The nuisance, danger and potential impacts that Tillerson complains about – lights, noise, heavy truck traffic, machinery running around the clock – are exactly the types of impacts that fracking is foisting upon communities – with the addition of drums of chemicals, noxious fumes, pipelines and waste pits. Thousands upon thousands of times over.

As this update to Drilling vs. The American Dream shows, evidence that fracking is having a pronounced effect on property values and costing communities dearly is stronger than ever. Decision-makers need to start paying attention and do something about it for the millions of their constituents who are, or may soon be, confronting the risks to their nest eggs and neighborhoods head on.