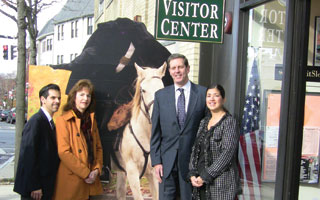 The Chamber was established in 1927 as an association with a volunteer Board of Directors and dues-paying members comprised of the local businesses, merchants and corporations. Each Board is required to deal with all aspects of being a business association which entails: promoting its local members, advocating and representing its members and communicating with the local municipalities in order to encourage growth, support those activities believed to be beneficial to the community and accomplish the greatest good for the greatest number (Chamber By-laws Art I Sec 2 Object).

The present officers of the Board of Directors (which meets at Hitachi on a monthly basis) have their own goals which are constantly being shaped by the community and the business needs that arise during each calendar year.  This past year Terence G. McGlynn, TGM Financial Group LTD, and Gerry Riera, CEO, Family YMCA at Tarrytown, the Co-Presidents of the Chamber, along with John Sardy, Executive Director, have been sure to keep the regular activities of the Chamber alive, namely:monthly membership meetings and networkings (next meeting with special invitation to corporate offices and businesses on routes 119 and 9, go to www.SleepyHollowTarrytownChamber.com to register, $5 nonmembers at door); bi-annual networking, Food, Wine & Beer Events, (A Taste of Sleepy Hollow/Tarrytown Restaurants  January 17, 2013 5:30-8:30 pm at Hudson Harbor go to www.SleepyHollowTarrytownChamber.com to register, $45 in advance); bi-annual Street Fairs; Village Merchants’ Council meetings; Best of … Awards and Milestone Anniversary Recognition events; and of course, the Visitor Center at 1 Neperan Road, Tarrytown (which welcomes hundreds of visitors a year providing information, 20 maps per year, and business directories).  The Chamber is sure to promote local business in print both locally and throughout the neighboring counties and online with the new website which provides many new features and functions, especially providing the opportunity for its members to login and add their own “hot” deals, business listing and events.

Gerry Riera would like to emphasize that the Chamber has given its members significant exposure to other businesses with the regular networking events which fosters excellent connections.  The Chamber has greatly increased each Village’s exposure with the bi-annual street fairs, which together attract approximately 20,000 attendees.

Terry McGlynn emphasizes that last year the Chamber has communicated and participated in events with the Westchester County Tourism and Film office, namely, the “Getaway Day” events at Grand Central Terminal and The Westchester mall to promote our Villages.  The Chamber, along with Brian Doyle, JP Doyles Restaurant (past Co-President) has worked to organize the efforts of the Village of Sleepy Hollow and the Sleepy Hollow merchants, with meetings of the Sleepy Hollow Merchants’ Council assisting the planning and organization of Halloween events and the Street Fair.  The Chamber, which will post the upcoming quarterly meeting schedule for those merchants interested, and Anthony Giaccio along with Leslie Blanco-Ishoo, will work towards growing and improving the Sleepy Hollow Business District.  McGlynn, along with John Van Dekker and JoAnne Murray are initiating an Ambassador program to start in 2013 which will elicit, support and enhance Chamber membership.

The Chamber along with Theresa McCarthy (Chair, TT Merchants’ Council) has enjoyed a working relationship with the local municipalities which was maintained previously by JoAnne Murray (past President and Co-President) who initiated the Council about 10 years ago, addressing major Village parking issues.   This subcommittee of the Chamber is presently continuing the dialogue with Village officials concerning amendments to the Village Film Code, distribution of a new merchant survey concerning amendments to the Code, and securing these amendments to the Code via the Board of Trustees to better meet
merchant needs.

Theresa McCarthy says that the Council is “maintaining an ongoing dialogue with Michael Blau, Village Administrator, concerning merchant parking needs and recommendations and has monitored and communicated the opening of the new South Washington Street Lot and former Junior League parking lot on Elizabeth Street. The Village Board is proposing changes to provide greater flexibility of parking in all lots. Specifically, merchant permits and resident permits can now be used in the metered spots on McKeel. Resident parking and merchant parking is permitted at all times in the West Elizabeth Street Lot.”

The Chamber has also organized and promoted the first “Sunday, Taste and Shop Tarrytown” with the assistance of John Van Dekker, Henry Cabral and Collen Goudie and other Tarrytown merchants. It submits beautification and maintenance needs of the merchants to the Village and has promoted the “Prettiest Town in America” posters (as ranked by Forbes) for display throughout the Village.
The Co-Presidents Elect, Theresa McCarthy and Leslie Blanco-Ishoo, Key Bank, consider the primary goal moving forward would be to foster greater exchange and involvement among groups/individuals who may have only a peripheral connection or no connection at all to the community.

John Sardy feels that in the wake of new condo construction in Sleepy Hollow and Tarrytown, a proposed bridge, the commercialization of route 119 with Stop and Shop and future commercial planning, the local businesses only stand to benefit from Chamber membership because with their active association the Chamber will help promote their business, market their products and services both in-county and tri-state-wide and strive to advocate and represent them to the municipalities.  The simple existence of a business does not serve the greater good in the long run. Rather, their active participation will create solutions going forward.

The Chamber sincerely thanks Michael Blau and Mayor Drew Fixell (TT), Mayor Ken Wray and Anthony Giaccio (SH), for their participation, communication and accomplishments, as well as Dr. Howard Smith,
Superintendent of Schools, for his participation at the monthly meetings.