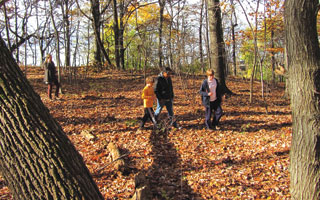 Peabody Field, located on Route 9  between Philipse Manor and Sleepy Hollow Manor, has been home to AYSO Soccer games and other athletic activities for years. Now a group of interested parents has turned their attention to the rest of the approximately 37 acres that make up the entirety of Peabody Preserve and runs all the way from Route 9 to the Hudson River.

“What I saw when I went into the property was an incredibly rich habitat with a lot of varieties of little mini-systems,” says Sleepy Hollow resident and parent Tracy Brown. “I would like to see it be a destination for all of our students throughout the Tarrytown school system. I’d like to see a series of trails that older students could maintain as part of their community service and trails that lead to different little mini outdoor classroom areas where activities can happen for a variety of grade levels.”

Since the land is already owned by the Public Schools of the Tarrytowns, Brown, who also serves as the Water Quality Advocate for RiverKeeper, presented her ambitious dream to Tarrytown. 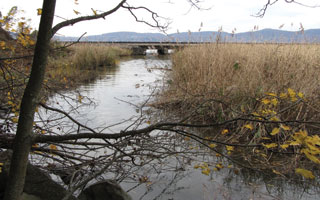 Superintendent Howard Smith, who was intrigued by the idea and suggested she enlist the support of some of the faculty. “Short of doing anything that would require special permits or that type of thing, a lot of it would simply boil down to getting the appropriate faculty and parents (who have interests in this) together and doing some visioning on what it would look like, what kind of things could be done, and how it would advance our curriculum,” he says.

Aside from the well-known athletic fields, Peabody Preserve exists in three main sections. Just beyond the fields is a lowland area with a complex water system including streams which then feed into Fremont Pond. Continuing west, the lowlands turn into a forested, hilly area with both old-growth and young-growth trees. Finally, just across Riverside Drive from the forest area rests a salt water wetland tidal area which feeds into the Hudson River.

The preserve is also a haven for wildlife. It is a home for deer, coyote, muskrat, frogs, turtles, and a huge variety of birds and insects including butterflies, eagles, egrets, blue heron, ducks, and other waterfowl and birds of prey. “Really anything that you would find in this part of Westchester has a place in this little swath of land,” says Brown.

Erenberg serves as the High School Science Research Advisor, and has brought Brown in to speak to his students about using Peabody Preserve for their projects and entertains thoughts of incorporating it into his instruction. “Hopefully in the coming year I’ll be presenting [Peabody] as an option for a place you can use for scientific study,” he says.

Brown sees Peabody possessing a host of curriculum opportunities for all grade levels. Along with the more detailed projects involving independent study and hard science for high schoolers and middle schoolers, the natural setting lends itself to ABC’s and color work in lower grades, or art projects for all ages. “It’s really limitless, the layers of learning,” she says.

Some years ago, the district looked at possibly developing the land as a site for a new school building, but the idea was dropped when it was discovered that the preserve falls under the jurisdiction of both the New York Department of Environmental Conservation and the Army Corps of Engineers because of the protected wetlands contained within.

Since Brown’s plan would not call for any development, she has far fewer regulation hurdles to overcome. All that is truly needed would be time spent to clear some of the overgrown trails and then to arrange for those trails to be maintained. There is even a large open area under trees just behind the playing fields that would be a perfect place to drop in a few benches and use as central classroom location.

With the help of others in the community, especially Sonia Cawley, Brown has reached out to Board of Education members, teachers at the High School, Middle School, and Washington Irving, as well as parent groups to enlist support. To date, everyone has expressed interest in the project and looked upon it favorably, but no one has stepped forward to carry the ball across the finish line.

“It seems that we need a champion,” she says. “Whether or not they do it through one classroom or opportunity or if they work with some other teachers and do a collaborative project out here.” Smith agrees that before Brown’s plan can be officially considered, she needs more input and more organization. “I think the first step, if there was a group of interested parents, would be to actually do some ground work with different stake holder groups in the school,” he says, specifically mentioning the need to get the district’s principals on board.

Even facing the daunting task of putting a full committee together to study the proposal, Brown remains upbeat. “It’s a good opportunity for our students, at a time when we have greatly reduced budgets where we have fewer field trips and fewer special educators coming in to add variety to our children’s learning experience, we can take advantage of something that we already own and that we can invest in over the generations,” she says. “The hope is that it’ll build and for every class of students that makes a commitment to that piece of property, it’ll be there for the next group, and it’ll grow and build on its own. I think this could be another signature offering of our school system.”