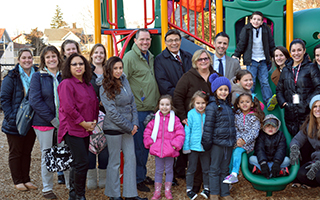 The new playground is the first project to be funded by GDC’s $400,000 donation to the Ossining School District.

At right, pictured with teachers, students and parents at the new playground are, from left, Board of Education President Bill Kress, GDC Founder Martin Ginsburg, Park School Principal Carrieann Sipos and Superintendent of Schools Raymond Sanchez

The ceremony was attended by school officials, parents and students. Ossining Board of Education President Bill Kress presented Mr. Ginsburg with a certificate of appreciation in a reception held at the school library.

Park Principal Carrieann Sipos told Mr. Ginsburg that the addition of the new playground has contributed to the overall well-being of Park students, meeting their physical and health needs. “We love the slides,” she said, “especially the fast slide.”  Superintendent of Schools Raymond Sanchez told Mr. Ginsburg that Park students “are loving the new playground. And when they smile, we smile.”

“We are very proud to help one of the most outstanding school districts in the region. This donation to the School District and others we have made to the Village are part of our ongoing commitment to investing in the communities where we build our developments,” said Mr. Ginsburg. In addition to the $400,000 donation to the School District, GDC has donated $600,000 to the Village of Ossining for downtown improvements.

GDC is currently constructing Harbor Square, a 188-unit luxury rental apartment complex with a 6,000-square-foot restaurant on the Ossining waterfront. Harbor Square is scheduled for completion in spring 2016.

About Ginsburg Development Companies
Founded in 1964 by principal Martin Ginsburg, Ginsburg Development Companies (GDC) is a premier residential developer in the northern suburbs of New York City. With 50 years of experience and market leadership, GDC has built many of the region’s most successful and prestigious luxury developments, many with a Hudson River and/or transit-friendly focus, including Harbors at Haverstraw, Livingston Ridge in Dobbs Ferry, Ichabod’s Landing in Sleepy Hollow, Mystic Pointe in Ossining, Marbury Corners in Pelham and Christie Place in Scarsdale.  GDC’s developments have won numerous design and community planning awards. In addition, GDC owns and manages a portfolio of commercial properties, located primarily in Westchester County, NY.