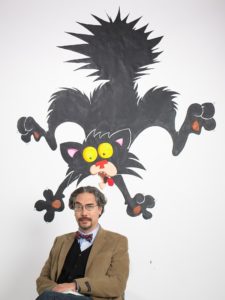 In this issue we’re launching a new column, My Westchester, a Q&A featuring some of our more high-profile neighbors in the River Towns. Turn to page 15 for the first in the series, an exclusive from ‘Bad Kitty’ author Nick Bruel, along with an opportunity to win one of three signed copies of his latest book Kitten Trouble. Go to www.riverjournalonline.com/Kitty to enter to win.

Shortly after moving to Pleasantville in May, 2018, Nick Bruel, author of the Bad Kitty series of books for children, noticed that his cat Esmerelda appeared especially agitated.  He decided that a frank conversation was in order, and for research purposes recorded their discussion.  The following is a transcript of the exchange.

Nick:  Okay, so what’s bothering you?

Nick:  Oh, come on.  You know that’s not true.  Tell me what’s bothering you.

Esme:  [Licking her foot, attempting to appear nonchalant] Well, we’ve lived in Tarrytown.  We’ve lived in Briarcliff Manor.  And now we live in Pleasantville.  We keep moving, but each time the dogs come with us.

Esme:  That’s the fuzzy, brown one that keeps walking into walls.  What about the big noisy one that’s always on her phone?

Nick:  Let’s not argue semantics, okay?  Don’t you like it here?  Tarrytown was great, but it felt a bit too densely populated for us being so close to the bridge.  Briarcliff was also great, but it also felt a little remote without a train station.  Pleasantville is sort of a nice compromise between the two, don’t you think?

Esme:  [Licking the pit below her front, right leg] I’ll have to take your word for it.  I don’t go outside, do I?  Something about your not wanting me to kill birds and mice and chipmunks and dragging them back into the house… blah, blah, blah.  I don’t get to have any fun.

Nick:  I don’t want you to get hurt either.  The whole of Westchester has coyotes in it.  I’ve seen them in the streets.  I’ve seen them in our own backyard.  If Toby bothers you, coyotes are big and fierce enough that they could use Toby for a toothpick.  Look… I know you’re tough, but you wouldn’t stand a chance against a coyote, and I do wish people would stop letting their cats out at night around here.

Nick:  Where would you want to go anyway?

Esme:  I liked that place “Bark and Meow” in Tarrytown.  You used to buy me some pretty terrific food and snacks there.  I’ve always been curious if they offered free samples.

Nick:  And now we have a place right here in Pleasantville.  Aardvark Pet Supplies is loaded with everything and anything you could need.  Just last week, I stopped in there to pick up some special snacks that I could use to hide a pill inside…

Esme:  Wait.  Those delicious chicken snacks?  There were pills inside them?  Pills?!

Nick:  Hey!  Let’s change the topic!  Did you know that just down the street from that pet store is one of my favorite bookstores in the world?  Village Bookstore has everything, and even if you can’t find exactly what you want, I guarantee that you’ll find something you want.  I love that place.  And we are so lucky to have it in our little town.  There are fewer and fewer bookstores anymore, and they all need all the help and support they can get.

Esme:  I can’t believe there were pills in those snacks.

Nick:  Let’s see… Larchmont has The Voracious Reader, which is a wonderful children’s bookstore.  I know for a fact that they stock my books.  And Chappaqua has Scattered Books, which is a great place to go for signed editions.  They sometimes let their bunny named Acorn roam around the store.

Nick:  Let’s not.  I think they frown upon patrons eating their pet.

Nick:  I can tell you’re still in a cross mood.  What I can do to make you feel better?

Esme: You could get rid of…

Nick:  I’m not getting rid of the dog and my daughter.  Don’t even think it.

Esme:  Okay!  Okay.  [Licks paw and rubs it on her face for a while.]  You know that cardboard scratcher I like so much?  You know… the one you got at Trader Joe’s along with those weird Indian food pouches you like so much.

Esme:  Well, it’s kind of lost some of its… you know… flavor since we moved.

Nick:  You mean you can’t smell the cat nip on it anymore.

Nick:  No problem.  I have some right here in the drawer by my bedside for just such occasions.  [Sprinkles cat nip.]

Esme:  ‘Scuse me while I kiss the sky. 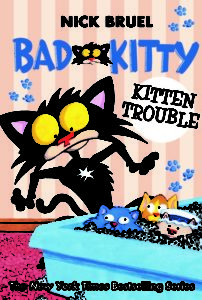 Remember, go to www.riverjournalonline.com/Kitty to enter to win one of three signed copies of Nick’s latest book Kitten Trouble.

About the Author: Nick Bruel