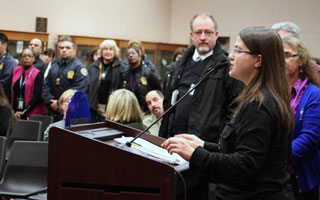 White Plains, NY – Democratic members of the Westchester County Board of Legislators strongly criticized the overall public safety and emergency staffing cuts in County Executive Rob Astorino’s Proposed 2013 Budget today following the BOL’s Budget & Appropriations meeting with the commissioners of the County’s Department of Correction and Department of Probation. Of the 125 layoffs proposed by Astorino, 35 are to come from the County’s public safety sector.

Remarked Legislator Virginia Perez (D-Yonkers), chair of the BOL’s Public Safety & Security Committee: “Elected officials are chosen to serve and protect the people that they represent. How can that protection be granted if there are severe cuts made in the Public Safety department? I do not agree with the 2013 Proposed Budget to cut staffing from the Departments of Public Safety and Emergency Services. As we study the budget line by line, it is our understanding that this proposal will be saving money rather than raising taxes, but the money saved will be at the expense of the people in Westchester County. As the Chair of the Public Safety and Security Committee I am diligently reviewing the proposed budget and encourage bipartisanship to restore these outrageous cuts.”

The seven job cuts in the Department of Emergency Services, including five layoffs, come right on the heels of the devastating Hurricane Sandy, which caused widespread damage and power outages in Westchester. On November 9, Department of Emergency Services Commissioner John M. Cullen wrote a letter to his staff and thanked them, saying “…your performance during the historic hurricane response were (sic) truly above and beyond what I could have imagined.” A few days later, the County Executive was handing out pink slips to five of his “dedicated professionals.”

“We always need to be at the peak of readiness when it comes to responding to county-wide emergencies—our residents and business owners value this and expect it,” said BOL majority Leader Pete Harckham (D-Katonah). “Compromising the integrity of the County’s response teams with layoffs and reducing spending will simply put more strain on our communities when they need help the most. Every year the County Executive has been either whacking away at this department or trying to eliminate it entirely. He needs to explain his rationale behind this reckless budget decision.”

Most of the public safety sector cuts in Astorino’s budget would come from the Department of Probation. Since Astorino has been in office, he has already cut 18 probation officer positions.

“Since taking office, the County Executive’s cuts to law enforcement have been both significant and troubling,” said Legislator Bill Ryan (D-White Plains). “Laying off important, hard-working professionals in the County’s probation department ends up letting released criminals slip through the cracks of our monitoring system, which puts our communities at risk.”

Ryan also noted that the County’s smart investment in probation officers saves taxpayers from having to fund the exponentially increased costs associated with incarceration and recidivism. “Probations works and saves money,” he said. “Smart budget decisions always look down the line to see what offers the best bang for the buck.”