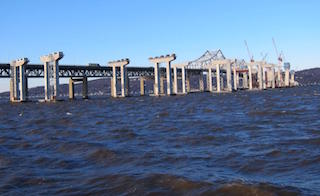 County Executive Robert P. Astorino announced that police and salvage operations were completed Thursday on the Hudson River at the site of the deadly March 12 tugboat crash at the Tappan Zee Bridge. After the tugboat Specialist was raised from the bottom of the river and stabilized at 9 a.m., members of the Westchester County Police Marine Unit and Emergency Services Unit boarded the vessel and recovered the body of Harry Hernandez, 56, of Staten Island. He was one of three crew members killed in the accident and the last to be recovered.

“We are hopeful that the conclusions we reach about this accident will help to prevent a similar tragedy from ever happening again,” Astorino said at a press conference on the Tarrytown waterfront.

Earlier in the morning, Astorino met with the Hernandez family to apprise them of the recovery effort and express his condolences for their loss.

“I know that these last two weeks have been a traumatic experience for the Hernandez family,” Astorino said. “They were telling me the stories of Harry and how he just loved the water and always wanted to be around it. But this was unfortunately a fateful journey.”

The county executive also asked that the people of Westchester keep the other victims of the tugboat tragedy – Paul Amon, 63, of Bayville, New Jersey and Timothy Conklin, 29, of Westbury, Long Island – and their families in their thoughts and prayers.

The salvage operation began at 7 am on Thursday, March 24, when the crane barge the Chesapeake 1000 began to slowly bring the Specialist to the surface from where it came to rest 46 feet below. Once the tug was raised, specialized equipment was used to de-water the vessel, capturing remaining fuel oil and other contaminants before they could enter the Hudson.

After the recovery of the missing crewman, County police detectives conducted a forensic examination of the vessel, cataloguing the damage and recovering evidence, including navigation systems, GPS devices, logbooks and other items. These items will be used in the ongoing investigation being conducted by the United States Coast Guard and the Westchester County Police.

The following statement from the Hernandez family was provided to the County Executive and is being disseminated at the family’s request:

“We would like to thank everyone in the Westchester County Police Department for their support and accommodations today. It has been a very difficult two weeks for the family. We appreciate everyone who has expressed their concern and helped to bring our family member back home. Even though we know that to be absent from the body is to be present with the Lord, we are comforted to know that we can now put his body to rest.”